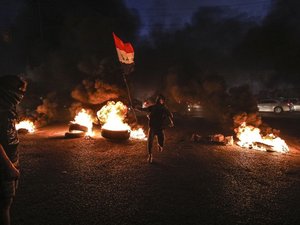 Iraq's government said Thursday that since last October when anti-government protests erupted in the country, a total of 560 protesters and members of the security forces have been killed in the violence.

The figure was reported by Hisham Daoud, an advisor to Iraq's prime minister, at a press conference in Baghdad. He said a fact-finding committee would investigate the killings further.

Also Thursday, Interior Minister Othman al-Ghanimi announced the result of an investigation into the deaths of two protesters at the hands of Iraqi security forces on Sunday.

He said that based on eye-witnesses and forensic reports, the protesters — who were taking part in a rally against government's electricity cuts amid Iraq's scorching summer heat — were killed by pellet guns fired by three policemen. The policemen were arrested.

The protests dwindled following restrictive measures to contain the spread of the coronavirus pandemic.

Daoud said the families of the dead would receive 10 million Iraqi dinars in compensation, along with a plot of land. The government has compiled an official list of the dead, in line with a pledge made by the country's new Prime Minister Mustafa al-Kadhimi to bring justice to protesters.

It is unclear how the government — which is cash-strapped in the wake of an economic crisis spurred by low oil prices — can afford the payouts. Civil activists insist the promise of compensation should not override the need to hold the killers accountable. Activists blame Iran-backed militias for killing and abducting protesters.

"No one will announce the name of killers," said 25-year-old activist Ali Haidar, expressing widespread pessimism on the part of the protesters that the perpetrators of the killings would be uncovered.

Meanwhile, Iraq's military said two Katyusha rockets landed on the periphery of Baghdad's airport late on Thursday without causing any damages or casualties. It was the latest in a spate of rocket and mortar attacks mostly targeting U.S. installations in the country. The statement said the rockets were launched from two separate positions in the Radwaniah area.