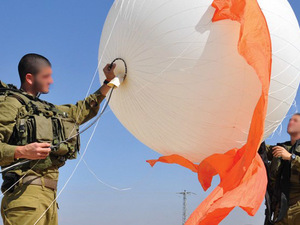 The agency said the balloon hovered over the town for 15 minutes.

Tensions have surged in the border area since Israel killed a Hizbullah militant in an airstrike in Syria.

On Monday, Israel shelled Lebanese border areas after accusing Hizbullah of staging an infiltration attempt. The Iran-backed group denied involvement in any activity on the border but vowed that its retaliation to the Syria raid will certainly come.

"The Iran-backed group denied involvement in any activity on the border" but doesn't deny that they are there illegally in violation of resolution 1701.

Israel violates lebanese air space everyday, get over it

Which would also mean that Israel should stop occupying Lebanese land.

Why should 1 party uphold all the resolution conditions when the other isn't?

Is the orange colour to celebrate Michel Aoun?