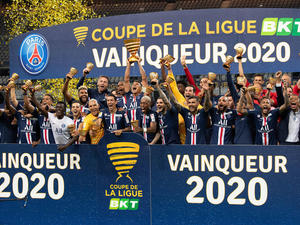 Paris Saint-Germain midfielder Ander Herrera is confident the French side will be in prime condition for their Champions League quarter-final against Atalanta despite Friday's League Cup final win against Lyon being just their second competitive outing in almost five months.

PSG beat Lyon 6-5 on penalties after an interminable final ended 0-0 after extra time at the Stade de France, where 3,500 spectators were allowed in as part of the loosening of the country's coronavirus restrictions.

Their victory, in what was the last ever final of an unloved competition that has now been scrapped, came a week after Thomas Tuchel's team defeated Saint-Etienne 1-0 to win the French Cup.

They had previously been awarded the Ligue 1 title by virtue of being top when the season was ended in April with 10 rounds of matches unplayed because of the health crisis.

"It has been a fantastic week for us, winning two trophies. It is not easy to do and we are very pleased," said former Manchester United midfielder Herrera.

"Lots of players have played their part in this success and we feel we are ready for the Champions League after the work we have done in the last four weeks."

However, having just those two cup finals as competitive outings since early March is hardly the best way to ready themselves for their first Champions League quarter-final in four years.

That match will be played on August 12 as a one-off tie behind closed doors in Lisbon.

PSG have also had a handful of friendly matches, but Atalanta may be in better shape having resumed their Serie A campaign in June. They only finish the season this weekend.

Herrera's team, meanwhile, looked sluggish for much of Friday's final, although the suffocating heat was partly responsible.

They missed Kylian Mbappe, who was crocked in the French Cup final a week earlier, suffering an ankle injury that could rule him out against Atalanta.

In his absence, Mauro Icardi was poor through the middle of the Paris attack and they only claimed victory thanks to Pablo Sarabia's sudden-death penalty in the shoot-out.

"We are optimistic for Kylian. We saw that he can walk now, he is young and he is a real professional," said Herrera.

"He really wants to play (against Atalanta) and is working every day, morning and night.

"Of course his presence is important and we hope he will play."

Mbappe is not the only worry -- defensive duo Marquinhos and Thiago Silva came off with cramp, while full-back Layvin Kurzawa hobbled off in the second half.

In any case, PSG claimed their fourth domestic treble in six years, underlining the extent of their domination of French football under Qatari ownership.

Lyon used to be top dogs but this defeat saw their silverware drought go on. They have not won a trophy since the French Cup in 2012, a year after the Qataris arrived and changed the footballing landscape in the country.

Rudi Garcia's team, who had Brazilian defender Rafael sent off late in extra time, were a disappointing seventh when the league season was curtailed and will miss out on European football next season for the first time in 24 years.

Unless, that is, they can go on and win the Champions League in Lisbon on August 23.

OL visit Juventus next Friday in their long-delayed last 16 second leg, defending a 1-0 lead from the first leg.

"We will need to do better to score in Turin but this is a good base for us to work on," insisted Garcia.

"It is important that we keep our heads up and keep in mind the things we did well in order to go on and qualify for the Champions League quarter-finals."

If they do see off Juventus, they will face Manchester City or Real Madrid in the last eight.