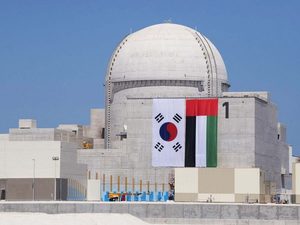 The United Arab Emirates' Barakah nuclear power plant, a first for the Arab world, successfully started up Saturday in a region grappling with conflicts.

Here are some facts about the plant that consists of four nuclear reactors, designed to supplement the energy needs of a country which has substantial oil reserves but is investing heavily in renewables.

- What is the UAE's nuclear program? -

The $22.4 billion Barakah plant, on the Gulf coast west of Abu Dhabi, is being built by a consortium led by the Korea Electric Power Corporation.

When fully operational, the four reactors will generate 5,600 megawatts, around 25 percent of the UAE's electricity needs.

On Saturday, the UAE pushed the button on the first of the four reactors. Commercial operation of Unit 1 is planned for later this year.

"The full operation of Barakah plant in the near future will contribute to the UAE's efforts for development and sustainability," Hamad Alkaabi, the UAE representative to the International Atomic Energy Agency, told journalists in January.

The plant is a regional first. Neighboring Saudi Arabia has announced plans to build up to 16 nuclear reactors, but they have yet to materialise.

The UAE's seven emirates have an energy-hungry population of 10 million, mostly expatriates. Its glass skyscrapers and their air-conditioning systems guzzle energy, particularly during the scorching summer.

The fourth largest crude producer in the OPEC cartel, the country was built on oil and sits on a huge, recently discovered gas field.

Nevertheless, it is spending billions to develop enough renewable energy to cover half of its needs by 2050.

Officials hope that as well as generating cheap electricity, the plant will elevate the UAE's status as a regional player with influence extending to Yemen, the Horn of Africa and Libya.

"This is part of the UAE's drive to diversify its energy economy, reduce dependence on fossil fuels and project its image as a regional leader in science and technology," one Gulf analyst told AFP.

Other big projects include a homegrown space program which sent the first Emirati astronaut into space last year and a probe to Mars last month.

The first of the Barakah plant's reactors had been due to come online in late 2017, but that was delayed several times to meet regulations.

"There have been delays in issuing the required licence (from the country's atomic regulator) to ensure the safety of the nuclear plant," the Gulf analyst said.

The UAE has repeatedly said its nuclear ambitions are for "peaceful purposes" and moved to dispel any concerns over safety.

It cites more than 40 international missions and reviews by the International Atomic Energy Agency (IAEA) and World Association of Nuclear Operators (WANO) since 2010, demonstrating its commitment to transparency.

Residents living within 50 kilometers (30 miles) of the plant have been instructed on what to do in the event of an accident.

The UAE has said it will not be developing a uranium enrichment programme or nuclear reprocessing technologies.

The Barakah plant is located near the border with Saudi Arabia, closer to the Qatari capital Doha than to the UAE capital Abu Dhabi. It lies on the Emirates coast, separated from Iran by troubled Gulf waters.

Iran has a nuclear power plant of its own on the Gulf coast, built by Russia after years of delay outside the city of Bushehr.

Relations between Iran and the UAE, a staunch U.S. ally, have deteriorated as Washington has pursued a "maximum pressure" policy against Tehran and accused it of attacking oil tankers in Gulf waters.

A missile and drone attack that knocked out half of energy giant Saudi Aramco's production was claimed by Yemen's Huthi rebels, but Washington pointed the finger at Iran.

"The 2019 attack on Aramco highlighted the vulnerability of the Gulf's energy infrastructure to external attacks," the Gulf analyst said.

Tensions pitting Iran against the U.S. and its allies "increases the vulnerability of new energy infrastructure to the possibility of such attacks."

Meanwhile Qatar, the target of a boycott by Saudi Arabia, the UAE and others since June 2017, last year said the plant poses a "flagrant threat to regional peace and environment."

The Emirates said there was no cause for concern, reiterating its commitment to "the highest degree of nuclear safety, security and nuclear non-proliferation."