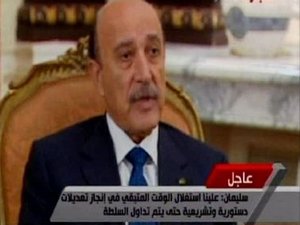 Such an attempt on the life of Suleiman would mark an alarming turn in the uprising against the regime of President Hosni Mubarak, who only recently named Suleiman as vice president in an effort to quell the unrest and possibly line up a successor, Fox News said.

A senior Obama administration official confirmed that the attack happened soon after Suleiman was appointed, on Jan. 29. The official described it as an organized attack on the VP’s motorcade.

The New York Times reported that Washington has been pushing proposals for Suleiman to head a transitional government.

But Prime Minister Ahmed Shafiq has ruled out the possibility that Mubarak would transfer power to Suleiman.