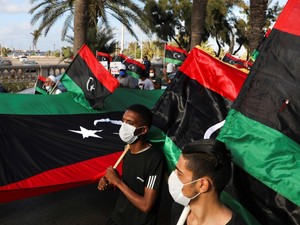 Libya's UN-recognised Government of National Accord (GNA) on Friday said the interior minister had been suspended after militia gunmen fired on peaceful protesters last week.

"Interior Minister Fathi Bashagha has been temporarily suspended" and will face an inquiry "on his statements about the protests and incidents in Tripoli and other cities", the GNA said.

He will be questioned on the authorisations and permits granted to the demonstrators, the security arrangements in place and the "violations committed", it said.

Demonstrations began on Sunday in Tripoli, the seat of the GNA, against poor public services and living conditions, and gunmen fired on the crowd. Similar shootings occurred on Monday and Wednesday.

The gunmen also kidnapped demonstrators, "sowing panic among the population and threatening security and public order", he said, promising to "protect unarmed civilians from the brutality of a gang of thugs".

At least six people were kidnapped from a Tripoli district by a militia overseen by the GNA, and many others were wounded, according to Human Rights Watch.

Bashagha said in a statement posted on the interior ministry's Facebook page early on Saturday that he was ready to submit to an investigation.

But he demanded any hearing be broadcast live for the sake of transparency.

Libya has endured almost a decade of violent chaos since the 2011 NATO-backed uprising that toppled and killed veteran dictator Moamer Kadhafi.

The country's main military faultline is between forces that back the GNA and those that support eastern strongman Khalifa Haftar, who runs a rival administration.

But there are also power struggles within each area.