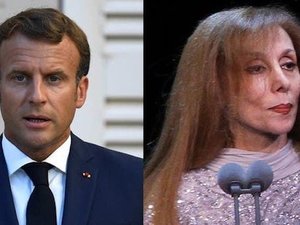 French President Emmanuel Macron returned to Lebanon on Monday, a country in the midst of an unprecedented crisis, for a two-day visit and a schedule packed with events and political talks aimed at charting a way out for the country.

But his first meeting wasn't with the new prime minister-designate appointed hours earlier, nor with the country's feuding politicians or civil society activists. Macron instead chose to see Lebanon's No. 1 diva Fairuz, a national symbol and one of the rare figures in Lebanon beloved and respected across the country.

The reclusive singer, arguably the most well-known and respected in the Arab world, is now 86 years old and has rarely been seen in public in recent years. But many Lebanese still start their day listening to her songs -- usually with a good dose of nostalgia -- and continue to see her as a unifying figure in a country plagued with conflict.

The meeting with Fairuz is a personal gesture from Macron, whose deep engagement with Lebanon has been denounced by his critics as a neocolonialist foray into a former French protectorate. Macron's defenders, however, including Beirut residents enraged at their own leaders, have praised him for visiting gutted neighborhoods in the wake of the Aug. 4 explosion that tore through their capital.

Following his arrival at Beirut airport Monday night, Macron went straight to visit Fairuz at her home in Rabieh, north of Beirut, away from the media upon her request. A few activists picketed Macron on his way in, holding banners urging him to reject the new prime minister-designate appointed hours earlier.

Many Lebanese expressed envy on social media that Macron will get to see Fairuz. Her songs accompanied the Lebanese during 15 years of civil war that ended in 1990 and continue to provide solace in difficult times. Her song, "Li Beirut," or "For Beirut," has repeatedly provided the soundtrack for a grieving nation, most recently following the explosion.

Macron was the first foreign leader to visit Lebanon -- he came two days after the explosion -- walking through the devastated streets of Beirut when no Lebanese official did. He promised to return Sept. 1, to take part in events marking Lebanon's centennial.

Upon leaving Lebanon several weeks ago, he tweeted in Arabic: "I love you Lebanon," the words of a famous Fairuz song.

Macron's visit to Fairuz on Monday night was received with mixed feelings, with some Lebanese activists praising it as a snub and a message for Lebanon's leaders, while others described it as a meaningless gesture. Macron is also planning to plant a cedar tree marking 100 years of Lebanese nationhood.

"I honestly don't see the point of the French president's visit to Fairuz, nor the celebratory title of Lebanon's 100th anniversary. Seriously, we have more pressuring issues to worry about and Lebanese really don't want to be celebrating," wrote journalist Luna Safwan on Twitter.

Another journalist, Nadim Koteich, wrote that the Fairuz visit and the Cedar planting are an unwelcome "cliche."

Fairuz, whose real name is Nohad Haddad, is a well known figure in France. She has had several concerts in the country, including at the Olympia concert venue in 1979, where she sang "Paris, Oh Flower of Freedom," and in one of Paris' biggest concert halls, the Bercy Palace, in 1988.

And you worship the backwards Iranian Mullahs!!!

Macron did in 1 month more than all the retarded corrupted Leb politicians in 30 years... God bless him and God bless France!!
It's funny to see all the Iranian stooges here jealous that so many people love Macron and hate Kizb and Berri
France! France! France!

The worst thing that ever happened to us was our independence from France. If only we were still a colony.