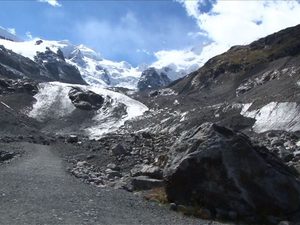 The volume of lakes formed as glaciers worldwide melt due to climate change has jumped by 50 percent in 30 years, according to a new study based on satellite data.

"We have known that not all meltwater is making it into the oceans immediately," lead author Dan Shugar, a geomorphologist and associate professor at the University of Calgary, said in a statement.

"But until now there were no data to estimate how much was being stored in lakes or groundwater."

The findings, published Monday in Nature Climate Change, will help scientists and governments identify potential hazards to communities downstream of these often unstable lakes, he said.

They will also improve the accuracy of sea level rise estimates through better understanding of how -- and how quickly -- water shed by glaciers makes it to the sea.

Between 1994 and 2017, the world's glaciers, especially in high-mountain regions, shed about 6.5 trillion tonnes in mass, according to earlier research.

The other main sources of sea level rise are ice sheets and the expansion of ocean water as it warms.

Earth's average surface temperature has risen one degree Celsius since preindustrial times, but high-mountain regions around the world have warmed at twice that pace, accelerating glacier melt.

Unlike normal lakes, glacier lakes are unstable because they are often dammed by ice or sediment composed of loose rock and debris.

When accumulating water bursts through these accidental barriers, massive flooding can occur downstream.

Known as glacial lake outbursts, this kind of flooding has been responsible for thousands of deaths in the last century, as well as the destruction of villages, infrastructure and livestock, according to the study, published in Nature Climate Change.

The most recent recorded incident was a glacial lake outburst that washed through the Hunza Valley in Pakistan in May.

In January, the UN Development Programme estimated that more than 3,000 glacial lakes have formed in the Hindu Kush-Himalayan region, with 33 posing an imminent threat that could impact as many as seven million people.

The new study, based on 250,000 scenes from NASA's Landsat satellite missions, estimates current glacial lake volume at more than 150 cubic kilometres (37 cubic miles), equivalent to one-third the volume of Lake Erie in the United States or twice the volume of Lake Geneva.

A decade ago, it would have not been possible to process and analyse that volume of data, said Shugar.