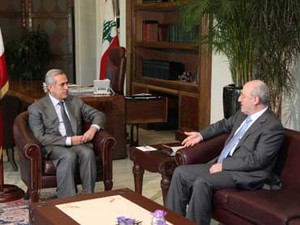 President Michel Suleiman hoped on Saturday that Lebanese officials would cooperate with Premier-designate Najib Miqati to form a cabinet that would face administrative, economic and security challenges.

The government should be formed “based on the democratic principles that distinguish Lebanon,” Suleiman said.

The cabinet should “confront the challenges in the administrative and economic fields,” the president said, adding it should provide security to citizens.