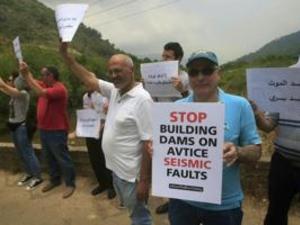 Lebanon's Bisri Valley lies on a green fertile bed, a spot that has cradled civilizations dating as far back as the Bronze Age. Its expansive lands of pine, citrus trees and ancient ruins are threatened with being submerged by a controversial mega dam funded by the World Bank.

For years, activists and locals have voiced their opposition to it, describing it as an environmental crime and a project that mirrors Lebanon's patronage system and bad governance.

The devastating explosion that rocked Beirut last month, killing more than 190 people and injuring thousands, has highlighted endemic corruption in Lebanon. It has also revived calls for investigations into mega-infrastructure projects proposed by politicians whose corruption and negligence the public blames for the disaster.

The Aug. 4 explosion was caused by the igniting of nearly 3,000 tons of ammonium nitrate, poorly stored for years at the capital's port. It is not clear what caused the chemicals to detonate, but it has fueled public outrage against the entire ruling elite.

The Bisri dam project was approved by Lebanon's government and parliament in 2015 and is funded through a $474 million loan by the World Bank, with a total cost of $617 million.

It is supposed to store 125 million cubic meters of water, providing a solution for chronic water shortages to 1.6 million Lebanese living in Beirut and Mount Lebanon, according to the World Bank website.

But those opposed to the project, some 35 kilometers south of the capital, say the dam is fraught with technical and corruption issues. Lebanon's politicians are notorious for using projects to pass out lucrative positions to their supporters to skim off cash or otherwise profit.

"It represents everything we have been fighting against, it is a model of the confessional patronage system that has led to Lebanon's demise," says Roland Nassour, co-founder of the Save the Bisri Valley Campaign.

In a recent letter to the World Bank, the campaign organizers reiterated their call to cancel the project, drawing a parallel between failed dam projects in Lebanon and the explosion, describing both "as a major lack of integrity in the public sector."

"This is one of the few projects left that the politicians and companies they hire can capitalize on and make money from," said Elias Hankash, a parliament member who resigned after the blast and has opposed the project from the beginning.

"Is it possible that today, a bankrupt country like Lebanon takes a multi-million-dollar loan to build a dam?" he said.

Lebanon is mired in an unprecedented economic crisis, with a collapsing currency, increasing inflation and hundreds of thousands thrown into poverty. The government defaulted on its foreign bonds commitment for the first time earlier this spring.

Activists have also voiced concerns that Bisri is on an active seismic fault line.

Geologist Mohammed Khawlie says the dam won't store the expected amounts of water. "The rocks are very porous, they absorb the water, the land is karstic," he explains, referring to a terrain that is formed of soluble rocks and limestone.

"If you want to solve this problem by injecting cement into the dam structure, then you are incurring hundreds of millions of dollars in additional cost."

Other recently built dams in Lebanon have failed for similar reasons, Khawlie said.

Environmental expert Paul Abi Rashed says the project will destroy more than 6 million square meters of green land, among Lebanon's most scenic and pristine. "We are talking about vast agricultural lands, pine forests, the second largest roosting area for migratory birds in Lebanon," he adds.

It also threatens the historic Mar Moussa church as well as Roman and Hellenistic ruins, though the World Bank says they will be preserved or moved.

The World Bank declined an interview request. On its website, it says, "an environment and social impact assessment was carried out in close collaboration with government agencies, civil society, the private sector and community members and has been approved by the Ministry of Environment."

Abi Rashed says the assessment has not been updated since 2016.

It was also conducted by Dar Al Handasah, a consulting firm that is a stakeholder in the project and listed as the supervising entity to the construction of the project's tunnel and pipeline.

"That is a clear conflict of interest," says Nassour. "The World Bank says the assessment should not be done by an entity affiliated in any way to the project."

The World Bank has heavily invested in mega dam projects in developing countries in the past but not without controversy. It withdrew from contentious hydro-power projects in India and the Democratic Republic of Congo and faces complaints against its dam projects in places like Uganda.

Email exchanges obtained by The Associated Press between the regional World Bank director Saroj Kumar Jha and his staff in April show the World Bank recently changed its mind about the Bisri dam project and is offering to use the rest of the loan for "protecting the poor and most vulnerable."

But Kumar mentions in his email that "the president prefers to proceed with the project," referring to President Michel Aoun, whose party has held the Energy Ministry for more than a decade.

The limited preliminary construction done so far on the dam has been suspended since the summer of 2019 under pressure from civil society.

Recently, the World Bank gave the Lebanese government the deadline of Sept. 4 to meet "the tasks that are preconditions to the commencement of construction of the dam." But in the aftermath of the explosion, the deadline is unlikely to be met.

The World Bank has already paid around $320 million to Lebanon, including $155 million for expropriations of private land in the valley.

"There are many alternatives to using the land, the government can invest in agriculture, or turn the land into a natural reserve and encourage eco-tourism," suggests Hankash.

Beirut's water shortages are primarily due to mismanagement, Nassour said. His group calls for parts of the loan to be redirected to support alternative water projects -- and to rebuild lives and livelihoods of people impacted by the Beirut blast.

I wonder who has the money for this project

Wonder no more, ALL OF THEM!!! the crooked politicians that is. If that was not the case the one who din't get the money would have spoken out!!! This project makes no sense, the IMF person who approved the funding is also of Middle eastern background, so need we say more??

Google says:
The World Bank Group is part of the United Nations system and has a formal relationship agreement with the UN, but retains its independence.