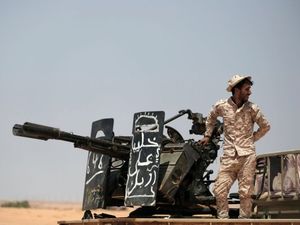 The interim UN envoy for Libya, Stephanie Williams, on Wednesday denounced what she called "blatant" ongoing violations of the arms embargo in effect on the war-wracked country.

Another 30 such flights were sent to western Libya to help forces loyal to the UN-recognized Government of National Accord (GNA), she added.

Nine cargo ships docked in western Libya, while three others reportedly arrived in the east of the country. She also accused foreign powers of "fortifying their assets" on both sides.

Turkey and Qatar have backed the GNA, while the United Arab Emirates, Egypt and Russia support Haftar, who is also suspected of receiving French backing.

"The arms embargo remains totally ineffective," according to an interim report from UN experts, who added that the violations are "extensive, blatant and with complete disregard for the sanctions".

Williams said the activity "constitutes an alarming breach of Libya's sovereignty, a blatant violation of the UN arms embargo."

The UN mission in Libya, whose mandate is up for renewal in mid-September, "continues to receive reports of large-scale presence of foreign mercenaries and operatives," she said.

Williams added that their presence complicates "chances of a future settlement."

"Not a single Russian serviceman is currently in Libya," he said, while his US counterpart Kelly Craft slammed the presence of Russian mercenaries linked to the Kremlin.

"There is no place for foreign mercenaries or proxy forces in Libya, including the Russian Ministry of Defense proxy Wagner Group, which is fighting alongside" Haftar, she said.

France's UN ambassador Nicolas de Riviere called for a reinforcement of the world body's mission in Libya, so that it can help shepherd an eventual ceasefire and ensure that the arms embargo is respected.

Several Council members called for a quick nomination of a permanent UN special envoy for Libya.

Ghassan Salame stepped down in March for health reasons, and bickering between the United States and its partners on how the role should be defined has stalled naming a successor.

Libya has endured almost a decade of violent chaos since the 2011 NATO-backed uprising that toppled and killed veteran dictator Moamer Kadhafi.

The GNA and a Haftar-backed eastern administration are now vying for power against a backdrop of dozens of local conflicts.