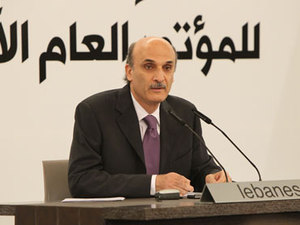 Lebanese Forces leader Samir Geagea on Saturday accused the March 8 coalition of seeking to form of a "Hizbullah-Syria" government in Lebanon.

He said he was not sure how President Michel Suleiman and Prime Minister-designate Najib Miqati can "carry on like this."

Geagea pointed out that March 8 believes that a "new phase is taking shape" in Lebanon and the region, adding that Suleiman and Miqati's views, however, differ from March 8's.

The LF leader noticed the "absence of threats of sectarian strife when the other camp (March 8) was able to change the equation."

March 8, he said without naming them, "always resort to intimidation to achieve the results they desire."

In response to a question, Geagea stressed that the March 14 coalition remains "coherent" with regard to its position on the government.

"They (Hizbullah) say respectable things and leave other things to Aoun and others," Geagea stressed.