Serena Through to Last 16 as Fresh Controversy Hits US Open 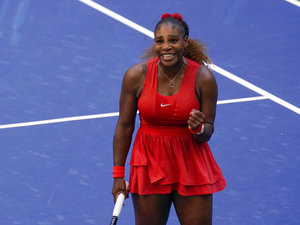 Williams, chasing a record-equaling 24th Grand Slam title, came from a set down to oust 2017 champion Sloane Stephens 2-6, 6-2, 6-2, in what she called an "intense" encounter on Arthur Ashe Stadium.

"In that first set I don't think she made any errors, honestly. She was just playing so clean and I just said, 'I don't want to lose in straight sets,'" said Williams.

With spectators barred from this year's Flushing Meadows event due to the pandemic, second and fourth seeds Sofia Kenin and Naomi Osaka took advantage of suites they have been assigned to check out the competition.

"It's cool us players can watch each other. It's interesting, I like it," said Williams, who will play 15th seed Maria Sakkari for a place in the quarter-finals.

The Greek player, who stunned Williams at the Western & Southern Open last month, progressed with a 6-3, 6-1 dismantling of America's 22nd seed Amanda Anisimova.

Off the court, number one seeds Kristina Mladenovic and Timea Babos were yanked from the women's doubles competition after Mladenovic was instructed to quarantine for coming in contact with French compatriot Benoit Paire, who tested positive for COVID-19 last weekend.

"All persons who were identified as having prolonged close contact with the infected player will quarantine in their rooms for the remainder of their quarantine period," the United States Tennis Association said in a statement.

The USTA said local public health authorities had issued the quarantine notices, which prevented the players commuting from their hotel to the USTA Billie Jean King National Tennis Center.

"The USTA is obligated to adhere to government guidance at the State, City and County level," the body said.

A spokesman for New York state's health department said the decision was "in the best interest" of health and safety.

But France's Alize Cornet described the move as "very brutal."

"It's definitely weird because she could play her first round of singles and first round of doubles, and now suddenly she's kicked out," Cornet added, after progressing to the last 16 when Madison Keys retired injured.

The shock intervention came a day after government officials tried to prevent Adrian Mannarino, who had also been in contact with Paire, from playing his last-32 match.

The health department contacted the USTA to say Mannarino should be quarantining in his hotel room.

The match got underway three hours after its scheduled start time, after authorities ruled it could go ahead following discussions with tennis officials that also included lobbying by world number one Novak Djokovic.

Mannarino and Mladenovic were two of 11, mostly French players, put under enhanced safety protocols on Monday after Paire was withdrawn from the US Open the previous day following his positive test.

The players signed an agreement with New York City authorities that allowed them to remain in the tournament under the enhanced restrictions, which involved daily testing and barred them from communal areas in their hotel.

Mannarino said Friday that organizers told him that New York state authorities had taken over the case and ruled that he was now not allowed to play.

Following her first-round singles win on Monday, Mladenovic said she had been "living in a nightmare" following Paire's positive test result.

The US Open is taking place behind closed doors because of the deadly pandemic.

Players movements are tightly controlled and everyone onsite is being tested regularly to minimize the risk of infection.

Paire, who later tested negative, exited the tournament in a huff, accusing authorities of operating a "fake bubble."

The players who were in contact with him have been told they won't be allowed to fly out of New York until next week.

And former number one Victoria Azarenka said she had "a great opportunity" to end her seven-year wait for a third Grand Slam after booking a last 16 berth with a straight-sets win over Poland's Iga Swiatek.