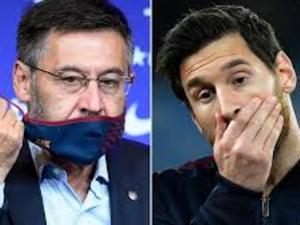 An unexpected winner in 2015 and Barcelona's bad guy in 2020, the club's president Josep Maria Bartomeu might feel some satisfaction after winning his showdown with Lionel Messi.

The last year has been chaotic for Barca, even more so for their president, and not just because they lost La Liga to Real Madrid before being humiliated by Bayern Munich in the Champions League.

Since January, Bartomeu has bore the brunt of the criticism, the Catalan businessman and a shareholder of Barcelona since he was eleven years old never far from controversy.

His appointment of Quique Setien as coach in January was a disappointment, with fans awaiting the return of their legendary former midfielder Xavi Hernandez to replace the clumsily dismissed Ernesto Valverde.

Then in February, the club had to deny it was at the root of a social media campaign to criticise those sceptical of the board, including key players, in order to improve the image of the president.

An audit report from PricewaterhouseCoopers concluded "no corrupt behavior" took place but a judicial investigation is ongoing, with the total amount paid allegedly six times higher than the market price.

And then in March, at the start of the coronavirus pandemic and with the club in serious financial difficulty, six members of the board resigned in protest at the way the club was being run.

They included two vice-presidents, Enrique Tombas and Emili Rousaud, the latter the one Bartomeu had in mind to be his successor.

There were calls for the presidential elections, originally scheduled to be held in June next year, to be brought forward but Bartomeu soldiered on, seemingly unperturbed.

His regime has been high on blunders and low on diplomacy.

Messi claimed on Friday that Bartomeu "did not keep his word" over an agreement to let him leave for free at the end of the season.

Messi said in March the players were "not surprised" that "people inside the club" wanted to shift the pressure onto them over the issue of pay cuts.

Managing Director of the multinational company ADELTE, which specializes in engineering for ports and airports, Bartomeu's first steps at Barcelona were taken in the basketball and handball sections.

He had even played basketball for some of Barca's youth teams before joining city rivals Espanyol and his connection to the sport helped him return to Camp Nou in 2003.

So did his long friendship with Sandro Rosell, with the pair forming part of Joan Laporta's successful bid for the presidency, only to be removed in 2005 as splits over the direction of the club emerged.

But in 2010, when Rosell bid for the top job himself, he included Bartomeu as his vice-president, winning the elections with 61 per cent of the "socio" vote.

Together, they began expunging the club of those linked to the philosophies of Laporta, Johan Cruyff and Pep Guardiola, instead favoring a more conservative approach associated with Josep Lluis Nunez, the president who sacked Cruyff as coach in 1996.

But in January 2014, Rosell resigned as he faced charges of corruption over the transfer of Neymar from Santos for which he would later be jailed, leaving Bartomeu to assume the interim presidency.

After a triumphant year in 2015 saw Barcelona win the treble with the trident - Messi, Neymar and Luis Suarez - Bartomeu rode the tide of goodwill to won the election the following summer with 54 per cent of the vote.

Yet success has not continued. Barca has since fallen four times in the quarter-finals of the Champions League and once in the semi-finals after another collapse against Liverpool.

Bartomeu attempted a revolution by hiring Setien and then Ronald Koeman but Setien had to be fired and Koeman has a mixed CV as a coach.

After the 8-2 defeat by Bayern, Bartomeu was also compelled to bring forward next year's elections until March.

But a vote of no confidence has been presented against him by the club's members, meaning he may not last that long. His victory over Messi may prove a hollow one.