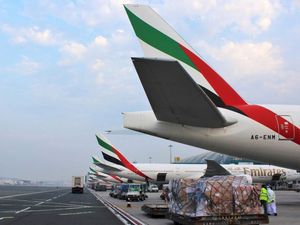 Emirates, the largest airline in the Middle East, said Monday it had so far returned $1.4 billion in refunds to customers amid sharply reduced global travel due to the coronavirus pandemic.

"Emirates reveals that is has returned over 5 billion dirhams in Covid-19 related travel refunds," the aviation giant said in a statement.

"More than 1.4 million refunds requests have been completed since March, representing 90 percent of the airline's backlog."

The Dubai-based carrier posted 1.1 billion dirhams ($288 million) in net profit for the financial year ending March, up from $237 million the previous year.

It was the 32nd straight year of profit for Emirates, but the sharp downturn in global travel in 2020 may result in a loss.

Emirates said it serves 80 destinations -- down from 157 before the pandemic -- but has gradually been expanding its network again after Dubai eased travel restriction to revive its tourism industry.

Its chief operating officer, Adel al-Redha, said last month that the airline expects to resume flights to all "network destinations" by summer 2021.

The airline has announced several rounds of layoffs, without disclosing numbers.

Before the virus hit, Emirates employed some 60,000 staff, including 4,300 pilots and nearly 22,000 cabin crew, according to its annual report.

Tourism has long been an economic mainstay of Dubai, which welcomed more than 16 million visitors last year. Before the pandemic, the aim was to reach 20 million this year.