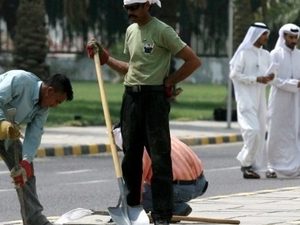 After more than 45 years washing cars in Kuwait to make ends meet, Egyptian Marzouq Mohammed will soon be kicked out of the country as economic woes and coronavirus stoke anti-foreigner sentiment.

The 65-year-old is among tens of thousands who will be forced to leave the oil-rich emirate, hard hit by collapsing crude prices.

The cash-strapped government said last month that from January it will no longer renew work permits for expatriates over the age of 60 without university degrees.

"Now they tell us this? Now they say 'he's 65, he must leave'. Leave where and to do what? We spent a lifetime here," Mohammed told AFP.

Many arrive as young adults to work in blue-collar jobs, occupations most Kuwaitis shun in favour of high-paying government positions.

But collapsing oil revenues, a vital source of state funds, are forcing a rethink.

Prime Minister Sabah Al-Khaled Al-Sabah has said the number of non-Kuwaitis should be capped at 30 percent of the 4.8 million population, down from 70 percent currently, to "resolve the demographic imbalance".

The country must rely more on Kuwaitis "to work in all professions" as it seeks to diversify its economy, he said.

But for Iranian Hasan Ali, also among the more than 68,000 people whose visas will not be renewed, leaving a country where he has spent more than half his 67 years will be heartbreaking.

"I got married here, I had my children here, I lived my life here," Ali, a greengrocer at the Al-Mubarakiya souq in Kuwait City, told AFP.

"It's difficult that I have to leave 'just like that' after all these years."

The coronavirus pandemic, which disproportionately hit migrant workers living in crowded lodgings, spotlighted the presence of a community increasingly seen as a burden -- particularly as the downturn snuffed out their jobs.

One famous Kuwaiti actress made headlines at the height of the panic in April by saying foreigners should be expelled to free up hospital beds for locals.

"We should send them out... put them in the desert. I'm not against humanity, but we have reached a stage where we're fed up," Hayat al-Fahad told a local television channel.

TV presenter Nadia al-Maraghi faced legal action for "inappropriate rhetoric" after visiting a holding centre for foreign workers being ejected for visa violations, where she and a friend joked that they had to wear masks because of the stink.

While the latest move to slash the migrant population has been welcomed by some, experts say the decision will hurt the private sector and stifle consumption.

The restaurants union has warned it could hit businesses already struggling after months of lockdown.

"By reducing the expats who do not add much value to the economy, jobs can be freed up to provide employment opportunities for nationals," he said.

However, despite a drive to encourage locals to enter the private job market, only about 72,000 locals work in the private sector -- just over five percent of the country's 1.4 million citizens.

"The government would also need to take steps to make the private sector much more attractive for nationals, who currently prefer to work in the public sector," Raghu said.

Populations across the Gulf are dipping as the coronavirus and the ensuing oil crunch ravage economies.

Kuwait's crunch has been particularly acute. Finance minister Barak al-Sheetan warned last month that there would not be enough cash to pay state salaries beyond October unless the government can secure fresh funds.

The country has one of the world's largest sovereign wealth funds, known as the Future Generations Fund, with assets estimated at $550 billion -- set aside for a post-oil era.

But the legislature accuses the government of mismanaging public finances, and has rejected a bill to borrow 20 billion dinars ($65 billion) over the next 30 years.

It is a rude reckoning for a country once seen as the most dynamic in the Gulf, but where generous subsidies and public sector salaries now make up three-quarters of oil-fuelled state budgets.

But Syrian Khalil Abdullah, a 63-year-old mechanic, said he still hoped for a reprieve to let him stay in Kuwait into his old age.

"Those who have shops and companies, is it possible for them to just leave everything behind and go?" he asked.