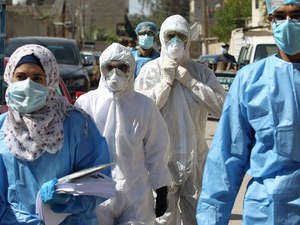 Coronavirus cases in the wider Middle East from Morocco to Pakistan have topped two million, the World Health Organization said on Thursday.

The caseload for the 21 countries has more than doubled since July 1, the UN agency said.

Regional director Ahmed Mandhari warned that even countries like Jordan, Lebanon, Morocco and Tunisia, which had kept their infection rates under control, were now facing significant upticks.

Mandhari said that a number of factors threatened to raise infection rates further -- the resumption of international travel across much of the region, the start of the new school year and the beginning of the flu season.

It is now six months since the WHO declared the novel coronavirus a pandemic.

Worldwide, there have been more than 27.7 million confirmed virus cases, according to an AFP count based on official statistics, with the worst-hit region Latin America and the Caribbean, followed by Europe.