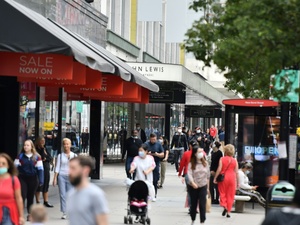 The British economy continued to recover in July, expanding by 6.6 percent, a slower pace of growth than in June when the country emerged from its virus lockdown, official data showed on Friday.

Gross domestic product had surged by 8.7 percent in June and by 2.4 percent in May, following a record contraction of 20 percent in April, the Office for National Statistics said in a statement.

"While it has continued steadily on the path towards recovery, the UK economy still has to make up nearly half of the GDP lost since the start of the pandemic," said ONS director of economic statistics, Darren Morgan.

He said that in July, "education grew strongly, as some children returned to school, while pubs, campsites and hairdressers all saw notable improvements".

"All areas of manufacturing, particularly distillers and car makers, saw improvements, while housebuilding also continued to recover," he said.

"However, both production and construction remain well below previous levels."

Britain entered lockdown in late March for around three months, forcing the nation into its deepest recession on record.

On Wednesday, the government tightened coronavirus restrictions owing to a sharp rise in cases, banning social gatherings of more than six people and making contact tracing mandatory in pubs and other venues.

Prime Minister Boris Johnson said the new "rule of six" in England would replace a raft of regulations he admitted were "complicated and confusing", and help reverse the upward trend of infections.

Britain has been hard hit by coronavirus, recording more than 41,500 deaths among people who tested positive -- the highest rate in Europe, and one of the highest in the world.