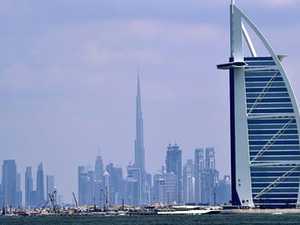 The United Arab Emirates said its daily novel coronavirus cases hit an all-time high of 1,007 on Saturday, exceeding the levels they reached at the last peak in May.

Authorities sounded the alarm earlier in the week when daily cases jumped five-fold compared with a month ago, and warned residents and citizens to abide by measures designed to curb the disease.

"Those who violate the preventive measures in place, whether an individual, shops, or restaurants, will be held accountable," Farida al-Hosani, spokeswoman for the Emirates' health sector, said on Thursday.

Hosani said 12 percent of cases were among residents or citizens returning to the UAE from abroad, even though they received negative tests from their destination countries, which are a requirement for entry.

The remainder of the cases were among those infected as a result of social events, contact in the workplace, or other gatherings.

Saturday's infection rate of 1,007 -- breaching the 1,000-mark for the first time -- came after rates steadily climbed during the week.

During the first wave of cases, the numbers peaked at 994 on May 22 before steadily declining, and then rising again a month ago.

Hosani said the spike in cases was due to people not abiding by measures such as social distancing and compulsory mask-wearing, as well as continuing to gather in large numbers in homes, shops and restaurants.

The UAE, which has a population of approximately nine million, has so far recorded 78,849 novel coronavirus cases, including 399 deaths.

The nation's vast community of migrant workers, who live in crowded and sometimes unsanitary conditions, were particularly hard hit by the disease.

The country, a collection of seven emirates, went into strict lockdown in March to suppress infections. But Dubai in particular is now largely open for business and tourism, although entering the capital Abu Dhabi still requires a negative coronavirus test.