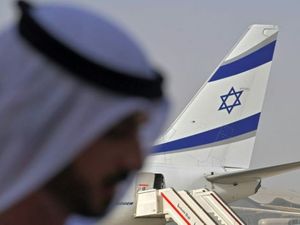 The moment a deal normalizing ties between the United Arab Emirates and Israel was announced, the head of a Tel Aviv technology organisation received dozens of LinkedIn invitations from Emiratis.

A month on from the August diplomatic breakthrough, Eugene Kandel, CEO of Start-Up Nation Central, was already in Dubai selling Israeli technology.

The launching of public business ties "can provide a lot of opportunities for many Israelis," Kandel told AFP.

Rather than wait for the signing ceremony at the White House on Tuesday between the two countries, as well as cementing an Israeli-Bahraini deal, Israeli business leaders rushed to Abu Dhabi and Dubai with catalogs of their wares.

The first business delegation visited the UAE last week, following an official Israeli government visit, and another group of industry leaders is due in the Emirates on Monday.

Among them is Kandel, a former economic advisor to Prime Minister Benjamin Netanyahu.

Since the landmark Israel-UAE deal was announced on August 13, the average number of Emirati users on the Start-Up Nation Central platform has increased by 122 percent.

The amount of time they have spent looking at Israeli start-ups on the website has jumped by 600 percent, according to the organisation, which did not provide user numbers.

Investment in Israel's start-up sector grew by 33 percent to $4.6 billion in the first half of this year, according to an internal study.

But the figures include contracts negotiated in 2019, and so do not fully show the impact of coronavirus on the industry.

The pandemic could lead to a "sharp decline" in start-up investments over the next few months, especially foreign ones, Kandel warned.

In the past, Israeli start-ups tended to grow locally before being acquired by foreign firms.

But that has been changing over the past five years, Kandel said.

"We believe that there is a lot of potential to continue this trend, and so that money from the Emirates could replace some of the other money," which was lost due to the pandemic, Kandel told AFP.

Israel and the UAE are keen to exchange agricultural technology -- both countries seek food security in the midst of the desert -- as well as financial technology and cybersecurity.

In recent years the Israeli company NSO, whose Pegasus spyware can remotely extract data from mobile phones, has signed contracts with Bahrain and the emirate of Abu Dhabi, according to Israeli newspaper Haaretz.

Investors could also be drawn to Israeli missiles, drones, anti-drone and anti-missile systems, as the country is a global leader in military technology.

Israel's prominence in these fields is in part due to its compulsory military service, which includes elite technology units that serve as start-up incubators.

The country's Jewish ultra-Orthodox and Arab sectors, however, which constitute around 10 and 20 percent of the population respectively, are largely exempt from the conscription and under-represented in the technology sector.

The Technion, one of Israel's leading universities, is committed to increasing the amount of tech graduates among Israel's minority groups.

Over the past 15 years the number of Arab students in the Technion has grown by 200 percent, the institution says.

With doors now opening to the Gulf, Kandel said Israel must now tap into that unrealized potential.

"Arab-Israelis... could be the cultural bridge," he said.

"They know how to work with (Israel's) Jewish majority, but also how to... work within the Arab world."

As well as working as developers, he saw potential for Arab-Israelis to play a role in business development, marketing and sales.

"You need somebody who speaks the language so you have a much wider net," he said. "It's like tapping another 20 percent of the population."

Israeli entrepreneur Erel Margalit, who heads investment firm JVP Margalit, is planning to send a delegation to the UAE in coming weeks.

The entrepreneur told AFP he sees the Emirates as a country of tech innovators, rather than just customers.

His goal is to open a start-up incubator in Dubai.

"It's our goal, it's our dream," Margalit said. "It would serve as a gateway to the whole region."