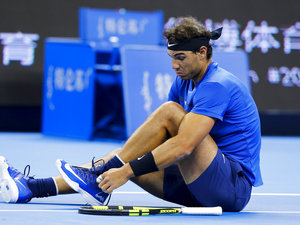 Rafael Nadal returns to competition after a six-month enforced break while Novak Djokovic is looking to make up for his US Open disqualification as the short clay-court season got underway in Rome on Monday without spectators.

The tournament at Rome's Foro Italico normally takes place in May but was pushed back after the coronavirus pandemic which turned the calendar upside down.

"Obviously, it's not the same thing. There is no public, we are in a bubble, we cannot enjoy the city," said Nadal, who will play his first competitive match since his win in Acapulco at the end of February.

"But at least we have a tennis tournament."

Nadal, 34, is the second seed behind world number one Djokovic in the tune-up for the final Grand Slam of the season at the French Open on September 27.

"Excited to be back. Circumstances have been, you know, heavy for everyone, tough ones," said Nadal who is targeting a tenth title in the Roman capital.

Professional tennis was shut down from March until early August.

And the world number two opted out of the U.S. hard court tour because of coronavirus concerns and citing the "madness" of the new calendar.

"Without regret," he insisted before his second round tie midweek against 27th-ranked compatriot Pablo Carreno Busta, who reached the semi-finals of the U.S. Open.

"I am similar to always, maybe a little bit worse because I didn't compete for the last six months.

"But here I am. I arrived with plenty of time to try to have the right practices. That's what I am doing. I know I have a tough match against Pablo. He's playing great."

"It's going to be a good test. I'm excited about going back to the competition without big expectations."

But third seed Stefanos Tsitsipas does not believe the lack of competition will have an impact on two-time defending champion Nadal who has a 61-6 record in the tournament.

"I don't think Rafa will be struggling much playing here," said Tsitsipas.

"Regardless of how he feels, I'm sure he'll find a way. He always finds a way every single year."

Four-time Rome winner Djokovic, who has reached nine finals in the Italian capital, wants to turn the page on his dramatic disqualification in the round of 16 at the U.S. Open, after throwing the ball involuntarily at a lines judge.

"It's great that I have a tournament right after that happened, because I feel like the earlier I get back in a competition mode, the faster I'll overcome that memory and kind of reprogram it," the Serb told reporters in the Italian capital.

"When you hit a ball like I did, you have a chance to hit someone on the court. The rules are clear, I accepted that.

"I'm going to take this in, you know, as profound as possible for me as a big lesson."

Djokovic had been unbeaten this year before his US Open exit and is targeting a title he last won in 2015.

"Rafa obviously decided to stay on clay and practice, surely that gives him more advantage, but even if he didn't practice for that long on clay, he would still be the number one favorite in Roland Garros or any other clay tournament because he's Rafa, you know," he added.

"And playing on clay he's the ultimate challenge.

The women's tournament will be without Australian world number one Ashleigh Barty, who will not compete again this season because of coronavirus concerns.

Serena Williams, suffering from an Achilles tendon problem, and US Open champion Naomi Osaka will also skip the Rome event.

World number two Simona Halep, absent in the United States, will be the top seed.

"I'm a little bit scared of what is going on in the world, but here I feel safe," said Halep.

"I feel ready to start the tournament, and I am also looking forward to the French Open," added the 2018 Roland Garros champion.