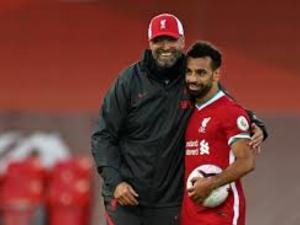 Jurgen Klopp praised both teams for a "proper spectacle" to launch the new Premier League season after Mohamed Salah's hat-trick helped Liverpool outgun Leeds 4-3 at an empty Anfield on Saturday.

Leeds' return to the English top-flight under Marcelo Bielsa after a 16-year absence was highly anticipated and a clash against the reigning champions lived up to expectations with five goals in the opening 33 minutes.

Salah's early penalty was cancelled out by Jack Harrison before Virgil van Dijk played both hero and villain for Klopp's men by heading home and then laying a second equalizer on a plate for Patrick Bamford.

A superb Salah strike again restored Liverpool's lead before half-time and even after Mateusz Klich levelled for a third time, the Egyptian had the final say with a penalty two minutes from time to complete his hat-trick.

"What a game, what an opponent, what a performance from both teams. A proper spectacle, I loved that," said Klopp.

"It is pretty rare you see that many goals in a game, we have left space for improvement in our defending but that is not unusual for a first game."

Liverpool dropped points at Anfield just once on their romp to a first league title in 30 years last season but were nearly undone on the opening day of their title defense by Leeds' daring attacking endeavor and a host of defensive errors.

The hosts made the perfect start when Salah's shot was handled inside the box by Robin Koch and Salah rifled home the resulting penalty.

True to Bielsa's philosophy, though, Leeds were not intimidated by the blow of conceding early and came out to go toe-to-toe with the champions.

Harrison equalized in style as the on-loan Manchester City winger cut inside Trent Alexander-Arnold and Joe Gomez before firing low and hard past Alisson Becker.

But it was at the back Leeds looked like a newly-promoted side as slack marking allowed Van Dijk a free header which Illan Meslier should have saved rather than letting the ball trickle over the line.

"To be able to score three goals is a positive, but we should have created more danger when we attacked," said a despondent Bielsa. "We were very efficient but we didn't create enough goalscoring opportunities. We also can't ignore we conceded four goals, and a lot of those goals were from avoidable situations."

Van Dijk has been near-faultless in two-and-a-half seasons since his signing transformed Liverpool's fortunes under Klopp.

However, a shootout was reminiscent of the German's early days in charge at Anfield as Van Dijk was badly at fault for Leeds' second as his attempted clearance teed up Bamford perfectly to side-foot beyond Alisson.

"We struggled in some defensive situations, that's why they scored, but I'm really happy with the things we did with the ball," added Klopp.

"We scored four goals and we could have scored more. I am completely fine with the game. Offensively it was good and defensively we can improve."

More poor defending from a set-piece meant the visitors again did not hang onto parity for long as Pascal Struijk's header from Andy Robertson's free-kick dropped to Salah at the edge of the box and he controlled before unleashing an unstoppable shot into the top corner.

Chances continued to come for both sides after the break as Alexander-Arnold was spared an embarrassing own goal by an offside flag against Harrison.

Leeds did level for a third time when the Liverpool defense was cut open again by Helder Costa's pass and Klich controlled before volleying beyond Alisson.

But Liverpool made a habit of scoring late winners on their way to the title last season and the Reds responded like champions for a fourth time late on.

Leeds' record signing Rodrigo ensured he had a debut to forget with a rash lunge on Fabinho to hand Liverpool a second penalty of the game.

Salah completed his hat-trick by keeping his cool again to send Meslier the wrong way and make sure Liverpool did not stumble out of the gate in the title race.