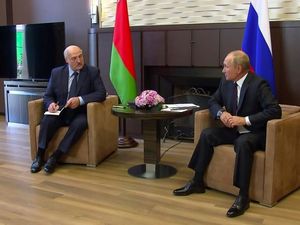 Lukashenko thanked Putin and vowed to stick closer to "elder brother" Moscow during one-to-one talks at the Russian president's residence in the Black Sea resort of Sochi that lasted around four hours.

The Belarusian leader was making his first foreign trip since his disputed win in August 9 presidential polls prompted mass protests against his rule, the latest drawing tens of thousands on Sunday in Minsk.

The Russian president said during joint televised comments he was "sure that considering your experience" this would "allow the development of the country's political system to reach new heights."

He said that Belarusians should deal with the political crisis "themselves, calmly and in dialogue with each other, without hints and pressure from outside".

As they spoke, Lukashenko leaned towards Putin in his chair, while the Russian leader sat with his legs placed wide apart, sometimes drumming his fingers and tapping his feet.

He said Lukashenko confirmed to Putin "his intention to make changes to the constitution," while declining to give details.

Lukashenko first raised this several years ago but has made few concrete proposals.

Since the mass protests began, he has suggested constitutional reforms as a response to calls for social change, although this falls far short of the opposition's demands.

Putin said last month that Russia had created a reserve group of law enforcement officers to help ensure security in Belarus and he reiterated Monday that Russia was "committed to all its obligations" under a military alliance of former Soviet countries.

Lukashenko thanked Putin for behaving "very decently" and said of Belarus that "we need to stick closer to our elder brother and cooperate on all issues".

After consistently blaming the crisis on outside players, Lukashenko criticized military drills in NATO countries near Belarus's borders, saying that Russia and Belarus would prepare their armies to resist any threats.

The Belarusian leader visited Russia a day after the latest demonstration against his rule saw police detain more than 500 protesters in Minsk.

Belarusian opposition leader Svetlana Tikhanovskaya, who claims she was the true winner in polls, condemned Putin for negotiating with "illegitimate Lukashenko."

"I really regret you decided to hold dialogue with a usurper and not with the Belarusian people," Tikhanovskaya, who has taken shelter in Lithuania, said in a statement.

She later said Lukashenko should be personally liable for Moscow's $1.5 billion loan and warned Russians that their taxes "will be used to pay for beating us up."

Lukashenko on Monday described the protests in Belarus as "a very serious lesson," that he said he hoped had been "overcome."

While his harsh crackdown on demonstrators has prompted international condemnation and sanctions, Russia has remained a firm ally.

Putin congratulated Lukashenko after the elections and the leaders have exchanged frequent calls in recent weeks.

As the position of the Belarusian strongman -- in power for 26 years -- has weakened, Russia has called for closer integration, although the leaders did not elaborate on this on Monday.

Putin has long urged full unification with Belarus, while Lukashenko has so far ruled this out.

Russia dwarfs Belarus, which has a population of around 9.5 million, and provides it with cheap fuel. Belarus is strategically important to Russia as a buffer zone, bordered to the West by EU and NATO members.

The two countries have already formed a close relationship as a "union state" with strong military and economic links.

While opposition protests have focused on domestic issues, protesters called on Lukashenko not to "sell the country" at the mass rally on Sunday.

Police detained nearly 7,000 people during protests in the days after the election and three demonstrators died, with those imprisoned saying they were beaten and tortured.

The United Nations rights chief Michelle Bachelet said Monday that these allegations "should be documented and investigated, with a view to bringing the perpetrators to justice."