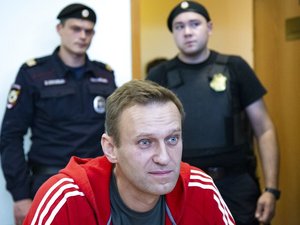 Russian opposition leader Alexei Navalny, who the West says was poisoned with a Novichok nerve agent, is regaining mobility and able to leave his bed, the Berlin hospital treating him said Monday.

The improvement in his condition came as two European laboratories corroborated the findings that the Soviet-era military grade agent was used on the Kremlin critic, prompting French President Emmanuel Macron to demand Vladimir Putin shed light on the "attempted murder."

Hitting back at doubts raised by Russia about the German investigation, Chancellor Angela Merkel's spokesman Steffen Seibert said Berlin had asked France and Sweden "for an independent review of the German evidence on the basis of new samples from Mr Navalny".

"The results of this review at specialized laboratories in France and Sweden are now available and confirm the German evidence" of the use of the banned weapons-grade substance, Seibert said in a statement.

The results prompted Macron to tell the Russian president in telephone talks that it was "imperative that all light be shed, without delay, on the circumstances of this attempted murder and who is responsible", the French presidency said in a statement.

Putin fired back that the claims remained "unsubstantiated accusations based on nothing against the Russian side".

In an interview with the RTVI television network on Monday, Foreign Minister Sergei Lavrov accused the West of going "beyond all the limits of decency and reasonableness".

"Our Western partners look at us arrogantly, but we too have the right to doubt their claims of professionalism," he said.

Although Germany was still waiting for the outcome of a separate evaluation by the OPCW global chemical weapons watchdog, Seibert said it was renewing the call for Russia to make a "declaration on the events".

"We are in close contact with our European partners about further steps," he added.

Asa Scott, head of division for CBRN defence and security at Sweden's Defense Research Agency, confirmed to AFP its lab in Umea in the north of the country had found Novichok in the sample and presumed it came from Russia.

"I find it unlikely that any other nation that is party to the Chemical Weapons Convention would have it," Scott said.

As the pressure on Moscow built, the German hospital treating Navalny said his condition continued to improve.

"The patient has been successfully removed from mechanical ventilation," Berlin's Charite hospital said. "He is currently undergoing mobilization and is able to leave his bed for short periods of time."

The 44-year-old anti-corruption campaigner became ill in Siberia last month and was hospitalized there before being flown to Berlin.

Germany said there was "unequivocal evidence" he was poisoned with Novichok but Russia angrily dismissed the findings, saying its doctors found no trace of poison.

Western politicians have insisted the incident appears likely to have been state-ordered. The Kremlin has denounced attempts to blame the Russian state as "absurd".

Despite international calls for Russia to carry out a transparent investigation or risk sanctions, it has not opened a criminal probe.

Kremlin spokesman Dmitry Peskov insisted Russia "de facto" is probing the incident but cannot open a criminal case "on the basis of tests by the German side, especially when carried out in German military labs".

Russia wants to question Navalny at his Berlin hospital, with Siberian transport police, who have been retracing his movements, saying Friday that Russia would be preparing a request for officers and an "expert" to shadow German investigators.

Navalny had been in Siberia to campaign ahead of elections held on Sunday.

Early results showed two of his allies won local parliament seats in the city of Tomsk where he fell ill.

The polls came a year ahead of parliamentary elections and were seen as a test for the Kremlin, as the ruling party faces sinking popularity and simmering public anger over economic woes.

Meanwhile the Navalny case has heightened tensions between Russia and the West, and sharpened calls for Germany to abandon the nearly-completed Nord Stream 2 gas pipeline project.

Critics say the multi-billion-euro infrastructure undertaking beneath the Baltic Sea that is set to double Russian natural gas shipments to Germany, would increase dependency on Russia.

Merkel said last week she would not rule out possible consequences for the pipeline.