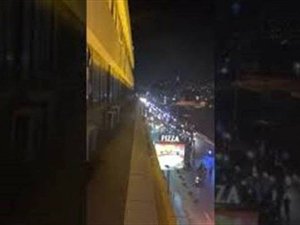 A clash erupted Monday evening between supporters of the Free Patriotic Movement and the Lebanese Forces outside the FPM headquarters in Sin el-Fil’s Mirna Chalouhi area.

Videos circulated online show gunfire erupting during the presence of a large convoy carrying LF supporters on the highway outside the HQ.

TV networks said the headquarters’ guards fired in the air after the tensions erupted with the LF supporters.

The videos also show the LF supporters shouting insults against the FPM.

According to TV networks, the two sides hurled stones and sticks at each other.

The army has since intervened in force and separated between the two parties.

“Guards” don’t have the right to shoot in the air just because they feel like it. What is mustafa going to do about it?

Zo3an FPM became like the Shia zo3an of Amal and Hizbala..... that’s what happens when you spend too much time with thugs.

Can’t wait to get rid of all these crooks once and for all.

Everyone who pledges allegiance and loyalty to a foreign nation
Nation over Lebanon must be tried for great treason
and expelled after a speedy trial. Otherwise there's
never the slightest hope for Lebanon. I would especially
target the Syrian national party thugs and godzilla
hezbollah.

Aounists are the biggest thugs ever ... they are mentally unstable

mou3aqin from both sides... side 1 losers pretending to be from the opposition, side 2 losers that achieved nothing since 4 years in power

Everyone who pledges allegiance and manifest loyalty to
a foreign nation ambitious to occupy and annex Lebanon
to make it an inseparable part of its territory,
must be expelled from Lebanon and their party dissolved
accordingly with no plea bargaining. First party to be
targeted must be the Syrian national party thugs
followed by godzilla hezbollah. Otherwise there's
not even the slightest for Lebanon.

Country is run by: gangsters +criminals+ corrupts= no hope for freedom or justice