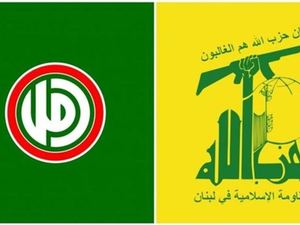 MP Mohammed Raad told President Michel Aoun during the cabinet consultations at Baabda that the "Shiite duo" insist on retaining the finance portfolio and on naming their own ministers in the upcoming cabinet, LBCI television reported on Tuesday.

The finance ministry has been headed by Berri's AMAL movement representative since 2014.

LBCI also reported recent “intensive” consultations at the highest levels between the Free Patriotic Movement and the Shiite duo regarding the formation of the cabinet.

Take the finance ministry and have no government and no country and go to war.
You stupid won't learn from the past 50 yearssssss

Hizbollah, via puppets Aoun and Bassil, took Lebanon hostage with its Iranian arms. It gradually destroyed our independence and economy transforming the best democracy in the Middle East with the finest human, natural, intellectual, entrepreneurial and world reach potential into a basket case, miserable and beggar nation. Its message of hate and criminal activities created an exodus of all western firms and dried up Gulf investments with their good paying jobs. Its wars and political instability reduced our 7% GNP growth in 2006 to negative growth costing over $200 billion. Without Hizbollah, Natanyahu would have lost his close election long time ago and Palestinians would have joined Israeli government. Time to wake up, to liberate Lebanon and bring this criminal organization and its puppets to justice!

It is common knowledge why these two iranian parties want to retain the finance ministry: to circumvent the sanctions on hezbollah. It has nothing to do with the 'constitution'. During Emile Lahoud tenure and the peak of Syrian hegemony over Lebanon, the Finance portfolio was given to جورج القرم, a Christian. Elias Saba, Demianos Kattar, and Jihad Azour are also Christians who were assigned the Finance portfolio in addition to the Sunni Fouad Saniora and Rafik Hariri.

You are absolutely right. They do not want to be enslaved by Netanyahu.

This is a reaction to sanctions against former Amal minister.

Hey bigjohn can you please explain to us simple folks what has the Shia parties done for Lebanon? or even for the Shia as a whole? do they have free health care, employment, water, electricity etc.. Berri and his wife robbed you as a shia and the rest of Lebanon blindly, You are following the shia politicians to the slaughetr like sheep. My friend the end goal is Lebanon will be forced to sign a peace treaty with Israel as the Gulf states have done so wake up before it's too late

Being enslaved is being enslaved whether by Israel or Iran.
Given a choice in a referendum now one would bet on Hizbullah and Amal loosing BIG time.
You know that and so do they.

Their face saving behavior for the benefit of looking good in front of their “people” is all they’re doing now in the end they WILL tow the line for the alternative is too dire for them before al, other Lebanese.

Amal and 7ezb el Shitan are a stage 4 cancer that must be dealt with even if it means total destruction and mass loss of life, lebanon was completely destroyed during the 1975/1990 Civil and wad rebuilt, if anyone thinks the Iranians are going to give up total control without a fight they sadly mistaking

Hey Yahudi sahyuni. First remove the cross since you hate it, second the Lebanese are not going to die for Israel so shut up and come to Lebanon we have mass open graves ready for you. Not only murdering settlers have a “right to defend themselves”.

Not going to happen!IMF said so, so Raad got to go!

Taking into account that the existing political parties still have the power to confiscate key positions in the new government, force us to believe that the reforms, won't meet the change that the majority of the population is asking for.

big John my man, how do you feel about the two new Arab states that have signed normalisation procedures with Israel. And by the way shouldn’t you be busy gathering the pieces your greater Syria has been blasted to,

I would like to ask them why they insist for specific portfolio ? are they more expert than others or they want to steel what is left?
The mind set in this country: the country is a big cake and i want to get the largest piece , i hope one day future generations will think in terms of : what is my value added to the country? .

Its not that difficult. Lebanon needs money. No money no country no progress. So shiite duo need to shut up and do as they are told by France so the poor Lebanese can live.

bunch of shameless theives. no money coming into lebanon anytime soon if kizb and amal have control of finance ministery/