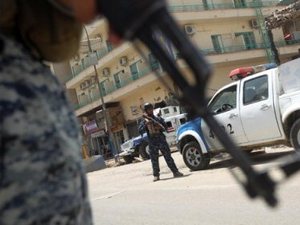 Three separate attacks in 24 hours have targeted Western diplomatic or military installations in Iraq, security and diplomatic sources said Tuesday, hinting at a new escalation between authorities and rogue groups.

While no casualties were reported in any of the attacks, Iraqi officials told AFP they see the spike as an indirect way to pressure the government as it tries to fight graft.

The attack, the first against a British government vehicle in Iraq in more than a decade, took place just outside the high-security Green Zone that houses the British embassy and other diplomatic missions, the source said.

A security official confirmed the details of the attack and said Iraqi forces inside the Green Zone were on alert.

The embassy's C-RAM rocket defense system shot both down.

Witnesses reported hearing a deep rolling sound then a blast, and seeing sprays of red lights.

The C-RAM, set up earlier this year at the embassy, scans for incoming munitions and explodes them in the air by targeting them with several thousand bullets per minute.

Prime Minister Mustafa al-Kadhemi has pledged to rein in rogue groups but has struggled to hold the perpetrators of such attacks to account.

Top Iraqi officials have told AFP they interpret the attacks as a response to Kadhemi's reform agenda, which such groups fear could deprive them of their sources of funding.

Indeed, the recent spike on Tuesday came just after the prime minister's office announced major personnel changes, including senior posts at the central bank, the Integrity Commission and the Investment Commission.

The new appointments are intended to clear out corruption in those institutions, officials said.

Iraq is ranked one of the top 20 most corrupt countries in the world according to Transparency International, with some $450 billion in public funds vanishing into the pockets of shady politicians and businessmen since 2003.