Beirut in Race to Save Heritage before Rain Returns 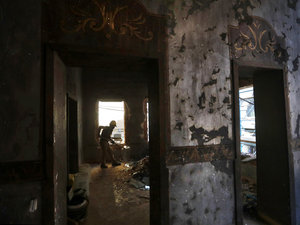 Beirut has only "days" left to preserve damaged heritage buildings before the rain finishes off the destruction caused by the August 4 port blast, Lebanon's antiquities chief warned Tuesday.

"There are 100 historical buildings that need covering before the rain," said Sarkis Khoury, head of the Lebanese Directorate General of Antiquities.

"There are 45 buildings that require total shoring up lest they collapse, and another 55 need partial shoring up," he told AFP.

He was speaking after a meeting with the heads of three international heritage organizations, who were visiting Beirut to muster support for the Lebanese capital.

One of the largest non-nuclear explosions in history, originating from a stock of ammonium nitrate at the Beirut port, ripped through the city and gutted some of its most historical streets six weeks ago.

Lebanon was already experiencing a deep social, economic and political crisis when the explosion -- which left more than 190 people dead and wounded thousands -- occurred.

Foreign powers, international organisations and Lebanese volunteers have taken the lead in rescue efforts, filling the vacuum left by a government that has no body's trust and is blamed by many Lebanese for the blast.

"We're playing against time, we're talking about days, weeks at most, to do all this work. It's really going to be very difficult," said Khoury.

Valéry Freland, the head of the International Alliance for the Protection of Cultural Heritage in Conflict Areas (ALIPH), signed a deal for an initial package of $5 million to support protection efforts.

"We need to work fast to protect these historical buildings because the rainy season is just around the corner," he said during the meeting, held in the Sursock Museum.

Khoury said he estimated around $300 million would be needed for the restoration of Beirut's heritage.

The Sursock Museum lies in one of the areas that sustained serious damage from the blast.

Its director, Zeina Arida, said that a preliminary estimate put the cost of restoring the museum and its collections at around $3 million.

She said that out of 180 works exhibited on the most affected floors of the museum, 50 of them had been damaged, of which eight severely.

Edouard Bitar, the president of the Live Love Lebanon civil society group, which has played a key role in the mass volunteering effort since the blast, said some logistical issues were also complicating preservation work.

"We're facing a problem today, which is that we have no lime mortar," he said.

"All heritage houses are made out of sandstone, and sandstone needs lime mortar, which doesn't exist in Lebanon."

He said this lime mortar needed to be imported from France or Italy and stressed that help was needed from construction giants such as a Lafarge and Saint-Gobain to bring the material as quickly as possible at an affordable price.

"If we don't fix these houses with lime, the restoration will be botched and our entire architectural DNA will be spoiled," Bitar said.