Two Wounded in Israel after Rockets Fired from Gaza 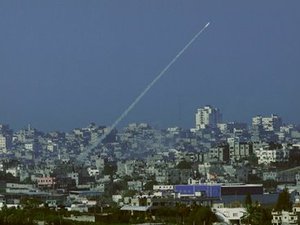 At least two people were wounded in Israel by rocket fire from Hamas-controlled Gaza on Tuesday, emergency services said, as Israel signed normalization deals with Bahrain and the UAE.

The Israeli army said two rockets were fired from the Gaza Strip, one of which was intercepted by its Iron Dome anti-missile system.

The other crashed into the southern coastal city of Ashdod, lightly wounding at least two people, local emergency services said.

Witnesses in Gaza said at least two rockets were fired from the north of the coastal enclave into Israeli territory.

There was no immediate claim of responsibility from Palestinian factions operating in Gaza.

The attack came as the United Arab Emirates and Bahrain signed a landmark accord in Washington establishing diplomatic relations with the Jewish state.

Throughout August, militants in the strip stepped up incendiary balloon attacks against Israel, which responded with nighttime air strikes against Hamas.

But the two sides reached a Qatari-mediated deal to end hostilities and revive a fragile 18-month truce.

The Islamist movement Hamas has joined the Palestinian Authority, dominated by arch-rival Fatah, in condemning the UAE and Bahraini accords with Israel as a "betrayal" of their cause.

But their calls for demonstrations against the deal Monday in the Palestinian territories only attracted a few hundred protesters, according to AFP correspondents.