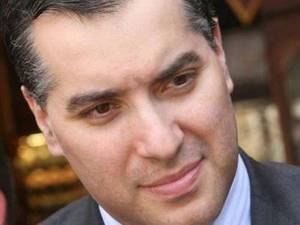 Prime Minister-designate Mustafa Adib might step down from the mission of forming a new government should the deadlock linked to the finance ministerial portfolio continue, media reports said on Tuesday.

“Adib may step down after heading to the Baabda Palace tomorrow,” al-Jadeed TV reported.

LBCI television said that “the French initiative has been suspended and Adib might step down after consulting with the President.”

Sources close to the PM-designate meanwhile told LBCI that “the choice of stepping down is one of the serious options.”

The privately-owned Akhbar al-Yawm news agency meanwhile said that Adib will visit Baabda on Wednesday to be briefed by President Michel Aoun on “the outcome of the consultations that he carried out regarding the governmental file.”

“As the deadline to form the government was extended to the weekend, Thursday will reportedly be crucial as to whether Adib will step down or a cabinet line-up will be announced,” the agency added.

Big mistake for Adib to step down. Aoun and the duo are the ones who need to step down for failing Lebanon before the Thawra catch them like rats. The only guaranty for Adib success is that all parties, and I mean Kelon, are against him. Then he will gain the absolute support of the people and the international community, the only possible way for success and saving Lebanon. Ultimately Kelon will be brought to justice and therefore he should not be supported by any of them. Please trust the Lebanese people and don't waste this unique opportunity. The more confident and courageous you are, the weaker and insignificant they will be. Do it for Lebanon, for the victims of the Port, for the ordinary people being abused by the Zuaama for ages.

Our empathies are mutual. How is succumbing to endless محاصصة marathons helpful?
Is it not time to let the “temple” fall on their heads instead of once again offering concessions?
In all honesty, have we not had enough? We’ve already been robbed of our life’s savings, more than half of us are above the poverty line and they still have their millions.
They now have much more to loose than we do, plain and simple. Resign and let France go completely to the American side and join what in some cases will be fatal sanctions on our corrupt politicians. Then it’ll be THEIR money in peril as ours is now.

Harriri will be back I am taking bets!!!

The return of saad is becoming a tradition

dwemm or aminedamane, whatever you wanna call yourself, stop trolling for israel while pretending to be lebanese

Nah, he is trolling for israel, as is evident from his other comments. And i am not an iranian stooge nor uneducated nor a peasant. I believe iran has done a lot of evil. Its rather you who call people iranian left and right. Satanic fool. Lebanon is in this mess because of crappy leaders supported by crappy citizens. The problem with you is that you choose to only focus on one sides evil. No single party could harm lebanon to this point alone. But you would need an IQ above 90 to see that.

Lebanon is in catch 22 situation:1) Politicians are either gangsters, corrupt or puppets to foreign interests, above all struggle for their individual agenda.2) Significant part of the population is either due to ideology or due to blackmail position support these politicians. 3) the other constructive and reasonably educated part of the population ,because of religion believes , are not united. This leads to the following:
Half of the Lebanese believe that Israel is the enemy and Iran is the friend, the other half believe just the opposite.This makes it impossible that all Lebanese will feel equal, united and proud of their nation. Since the independence this has not been the case, and this is worse enemy than Iran or Israel.
Solution? yes: it is time that 2 Lebanon should emerge. one east oriented second opposite direction

You must be a delusional Zionist to think that "half" of Lebanese think Israel is a friend. How many MP's in Lebanon say Israel is a friend? Lahd and his Israeli paid collaborators were wiped out a long time ago.

better to have a troll from Israel than one from Hezbo. All hezbollah has done for Lebanon is being death, doom and sanctions. They like the Iranian model of torture and poverty for its people. Well congratulations Hezbo troll that's where Lebanon is heading. Bravo!

Israel is the root cause of the problems with HA. Do yourself and everyone else a favor. Go somewhere else to kill children, demolish homes, and steal land. The US has 50 states. Ask the Israeli lobby in the US to give you a "Jewish" state. Your entire criminal existence is targeted. It is NOT safe for Jews to live in Palestine any longer.

when did I supported killing children?

Israel has been killing 98% of the civilians with their conflict with the Christian and Muslim Arabs Shimon!

He has principles, and hopefully the EU and US will now put sanction not only on Barry and his family, but the entire Amal party and call it like it is, a mafia. They engage in the same activities under the same pretenses. What is different again?

I can give you one thing though, The hizb is guilty for supporting AMAL the most disgusting people in lebanon. The gangsters and nawar who breathe and live corruption. And whos leader is a ruthless murderer , international spy, thief and criminal.
The hizb is also guilty for not calling out the corrupt criminals and supporting the system of corruption. This is not right, but it suits the hizb to stay in power so that they can defend us from israel and the west.

The west and israel has a nasty plan for lebanon, and what has been happening lately is evident. This would have happened long time ago if it wasnt for hizb's presence. Because the ministers of lebanon have no shame or morals or patriotism and would sell out lebanon at any cost.
Just like they are selling it now to macron because macron holds their money hostage in foreign accounts and is threatning them with freezing the accounts.

Just like the West stopped supporting apartheid South Africa, they will stop supporting ethnic cleansing Apartheid Israel. Without the right of return, this year the Christian and Arab population will very soon outnumber the Jewish inhabitants in the area Israel controls and the Jewish population will become a decreasing minority. There is an ANTI racist movement in the west. Israel and South Africa were both created by the West. Just like the west ended its support for South Africa they will end their support for Israeli Apartheid. After 76 years, Zionist Jews can no longer use the holocaust to blackmail the World anymore.

Lebanon is going down cuz until now when the country is burning and people are starving, you see people in the street screaming Hariri, oun, berri, hizb, jumblat, jeajea and god knows what else. These groups are all criminals , gangsters, merciless murderers who sold us out. But the hizb is the least of them. So do yourself a favor and concentrate on the other parties for the sake of whats left of lebanon. cuz your words just help support a civil war thats currently being planned to end lebanon for good.

The Israeli paid propagandist under many names only cares about expanding his criminal terrorist racist agenda and trying to get Lebanese kill themselves for Israel. You will be very disappointed.