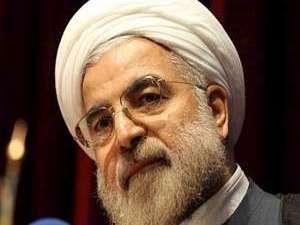 Iran's President Hassan Rouhani said on Wednesday that the United Arab Emirates and Bahrain will be responsible for any 'consequences' resulting from their normalization of relations with Tehran's arch-foe Israel.

The remarks came a day after Israeli Prime Minister Benjamin Netanyahu and the foreign ministers of Bahrain and the United Arab Emirates signed agreements establishing full diplomatic ties at a ceremony at the White House.

Speaking at a cabinet meeting, Rouhani said that Israel is "committing more crimes in Palestine every day."

"Some of the region's countries, their people are pious Muslims but their rulers neither understand religion nor (their) debt ... to the nation of Palestine, to their brothers speaking their language," he said in televised remarks.

"How could you reach out your hands to Israel? And then you want to give them bases in the region? All the severe consequences that would arise from this are on you."

"After decades of division and conflict we mark the dawn of a new Middle East," Trump said.

Iran had previously warned Bahrain that its deal made it a partner to Israel's "crimes" and accused the UAE of betraying the Muslim world.

In 2016, Bahrain cut diplomatic ties with Iran and the UAE downgraded relations amid rising tensions between Saudi Arabia and the Islamic republic.

Sunni-ruled Bahrain has faced long-running unrest among its large Shiite community that it has consistently blamed on Iran.

You wouldn't want to be in Tel Abib or in any other part of occupied Palestine. It would be better if you and millions of settlers like you go back where you came from. Palestine is NOT a safe refuge for Jews.

How lucky they are. There is not a single settler in what you call "Palestine".

Keep talking shit Rouhani. Just go back to torturing your own people and other Muslims like usual.

President Rouhani, cacatollah Khamaney are irrelevant pieces of shiites living on borrowed time, their end is nigh.

Yeah sure, they’ll bear consequences of peace as in billions in trade and further marginalization of Lebanon. Iran seems to live on a different planet.

Just remember that these peace agreements will be pushing Iran even further into the corner, and through this their support, at least financially, for their puppets Aoun and Hizballah, will decrease, drawing Lebanon even further down into chaos.

You can write all the comments you want, but just remember that the growing arsenal of missiles and rockets will be targeting every inch of your criminal existence because the Lebanese "have a right to defend themselves" until Apartheid Israel is no longer in existence.

Lak get serious will you, nice to dream I guess.

Bigjohn, it is about time that the Israeli army simply tells the Hamas and Hizballah terrorists "For every missile you launch into Israel, we will fire 100 back"

These Gulf tyrants are committing suicide by trying to please Trump. They are now close targets of Iran and NO one will help them. Is Israel going to bring troops to the Persian gulf? They will be easier targets than the Iranian advisors in Syria. The Sunni Arab populace will not come to the aid of Arab zionist puppets. For years the Gulf leaders used the Sunnis versus Shiites somewhat successfully. Now it is Israeli Gulf Arab puppets versus the people of the region including.

I remember when Egypt or actually the tyrant Sadat sign a "peace treaty" with Israel to get ALL of his land back. Two years later he was assassinated. A week before he was assassinated he put 3,000 Egyptians in jail including the top Coptic spokesperson. At Sadat's funeral there were only 1,000 mostly foreigners paying tribute copared to millions at Nasser funeral in 1970. There has not been any big trade deals with Israel and the Egyptian people totally have boycotted Apartheid Israel. Mubarak who replaced Sadat was overthrown, and so was Morsi. It is only time when The secularists unite with the Islamists and get rid of Sisi.

The only people Iran targets are their own people. They are the biggest killers of Muslims in the Middle East. Israel has nothing compared to these guys