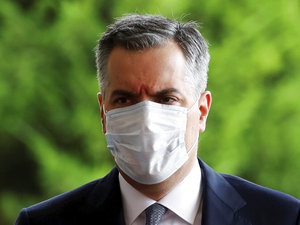 Prime Minister-designate Mustafa Adib will not visit Baabda on Wednesday and has postponed the appointment to Thursday to allow for further political contacts over the new government, al-Jadeed TV has reported.

LBCI television meanwhile said that French official Bernard Émié -- who is the head of the Directorate-General for External Security and an ex-ambassador to Lebanon -- has carried out a series of contacts aimed at resolving the impasse.

“The French initiative has accordingly been given an additional 24 hours for further contacts aimed at reaching an exit to the governmental file,” LBCI added.

The TV network also noted that “the atmosphere in Ain el-Tineh indicates that the course of the government formation negotiations has been rectified.”

The main obstacle reportedly delaying the formation of the new government is Speaker Nabih Berri’s insistence on retaining the finance portfolio.

I belong to the LGBT community

I’m very proud of you, you finally came out of the closet. But, honestly, you should have done it earlier, because we all knew!

Mr. prime minister designate, what we need from you is proof that you have what it takes to confront the cancer in our midst. If not, please resign and let the chips fall where they may. We lost everything because of our politicians and broken system of governance, let the US sanctions hit with full force those intransigent idiots in our midst.