Abbas Says 'No Peace' in Mideast without End to Israel Occupation 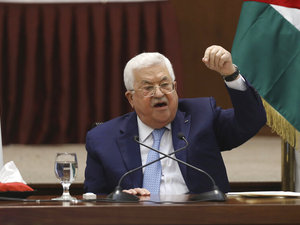 Palestinian leader Mahmoud Abbas has said only an Israeli withdrawal from occupied territories can bring peace to the Middle East, as the UAE and Bahrain signed normalization accords with Israel.

"Peace, security and stability will not be achieved in the region until the Israeli occupation ends," he said in a statement after the signing in Washington of the deals, condemned by the Palestinians as a "betrayal" of their cause.

Most of the Arab States, especially the Sunni ones, are looking forward into the third decade of the 21st Century.
Unfortunately, for them at least, the leaders of the Shia states are looking backwards to the middle of the 20th Century, and trying o pull the whole of the Moslem world with them.
They will never succeed.

You are on drugs. As a supposed Sunni I can assure you that the only peace deal that matters is the one with Palestinians. The deals that Israel is signing with Dictators will last until these Dictators are in power. A just peace is the only thing that can save Israel.

Abbas made a mistake by not engaging with Trump on his plan. Maybe Trump would've made it more favorable to the Pals, and if not Abbas could've criticized it by saying Trump ignored his proposals. By not participating, other Sunni nations view the Pals as obstacles to the process and are moving forward to align with Israel against Iran.

the project " creation of Israel" has been well designed and professionally as master piece executed. Since the creation of Israel a chess game started, on one front Palestinians leaders supported by some Arab countries, driven by emotions, disconnect with the reality; on the other front an intelligent group supported by western WW2 guilt feeling trauma . In a carefully organised strategy the rational won step by step from the emotions ,it took some years but it was calculated, chess mate ! don't cry for me Palestina....Arafat,Abbas, PLO etc...you were the best allies the Israelis could imagine. The tragedy of the palestinians is an infamy on the consious of the civilised world , 70 years living in gettos is inhuman, first the palestinians leaders then the civilised world are to blame.

Kazan, how right you are "70 years living in gettos is inhuman". So why are Jordan, Syria, Lebanon and other Arab States still keeping them in camps instead of integrating them into their countries? Millions of refugees all over the world (Including more than a million Moslems from India into Pakistan) have been integrated into and given full rights including citizenship.
By the way - should be Ghettoes and inhumane.