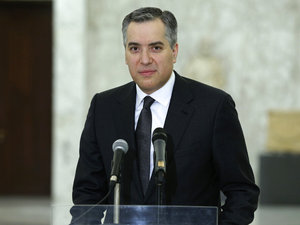 Prime Minister-designate Mustafa Adib was the one who called President Michel Aoun and asked for 24 more hours to try and find solutions for the obstacles delaying the formation of the new government, al-Jadeed TV reported Wednesday afternoon.

General Security chief Maj. Gen. Abbas Ibrahim has meanwhile launched mediation efforts at Aoun’s request and will communicate with Hizbullah, the AMAL Movement and France in a bid to resolve the finance portfolio obstacle, al-Jadeed quoted unnamed sources as saying.

As for the stance of ex-PM Saad Hariri, who on Wednesday said that “the finance ministry and all ministerial portfolios are not an exclusive right to any sect,” the sources said that Hariri “will not offer concessions this time.”

“He is not willing to reverse his stance on the rotation of portfolios,” the sources added, denying reports that senior French official Bernard Émié has visited Lebanon.

“He is rather holding contacts with political parties in Lebanon,” the sources noted.

Aoun has meanwhile said that he supports the rotation of all portfolios on the condition of “national consensus” on such a move, the sources said.

Referring to the consultations that the president held with parliamentary blocs on Monday and Tuesday, the sources said the blocs told Aoun that they will not grant their vote of confidence to a government that they do not approve of.

“They will not accept that the ministers be exclusively named by the PM-designate,” the sources added, pointing out that “the problem lies in the PM-designate’s failure to directly communicate with the parties concerned.”

“He has not communicated with the ‘Shiite duo’ over the interior portfolio,” the sources also noted.

“He has not communicated with the ‘Shiite duo’ over the interior portfolio,”

This "DUO" is the cancer of Lebanon! Are there not any chi3a other then those two? Where are the voices of the independant chi3a who refuse the "DUO"!!??

OK fully agree and I fully support the thoughts, but I think this applies to all other sects , there is a silence group in every religion who are tired of the continuous tensions, they want peace. I find it more constructive to not blame a single sect about their shortcoming

No hard feelings, being an agnostic may be it's easy for me to think this way

Agnostic Zionists are no better than religious Zionists. You are still an ethnic cleansing racist bigot.

The duo at best is 30% of us Lebanese, no need to consult with every Tom and Harry about every detail. They’re not interested in saving Lebanon only in saving Iran.
Else let the Americans deal with them.

This is not consensus. This is bullying. It works only one way: shias or their cronies stopping this and that.

There is only 1 way to stop this. Raze iran or civil war in lebanon. Otherwize we will keep on being second category citizens in our own country

No we Lebanese are not going to die to help your terrorist ethnic cleansing apartheid state.

While many do, you will be surprised how many do not.

abbas_9 you have every right to express your shia thoughts.

No, Israeli Zionist Jews just love to continue to kill children, Destroy their homes, steal their land and take away their means of livelihood.