4 Held in France for Voicing Support for Hizbullah, Other Groups 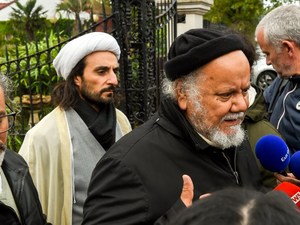 Four former directors of a major Shiite Muslim center in France have been arrested on suspicion of continuing to run the association despite its dissolution over alleged support for armed jihad, a judicial source said Wednesday.

The Zahra Center in northern France was founded in 2009 by Yahia Gouasmi, a religious figure who has spoken in support of Iran-backed Lebanese armed group Hizbullah.

It was shuttered in March last year by the French government for alleged calls to armed jihadism and condoning violence by Hizbullah and other organizations classified as “terror” groups.

The center is also alleged to have disseminated hate speech, anti-semitism and to have incited violence.

The judicial source told AFP that four former leaders of the center were taken into custody on Tuesday, though one has been freed for health reasons.

Prosecutors are investigating the group for "participation in or maintenance of a dissolved association."

The four are accused of preaching on site and on social media, the prosecution service said.

In October 2018, French police launched a dawn anti-terror raid on the center as well as the homes of its directors, yielding a cache of illegal firearms.

because as shiaa they were fearing attacks from DAESH !!!!

France is slowly waking up. Germany woke up last year.

Macron should invite them to the Élysée since they are not part of the military wing of hezbollah.