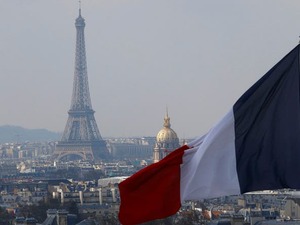 France regrets that Lebanese political leaders “have not been able to honor their pledges to French Presidency Emmanuel Macron” regarding the formation of a new government, the French Presidency said on Wednesday.

“It's not too late for forming a government in Lebanon and working for Lebanon’s interest,” the Presidency added in a statement.

The statement called on officials to help Prime Minister-designate Mustafa Adib "form a government that is up to dealing with the gravity of the situation."

"We are continuing to closely follow the situation and pursue our contacts with Lebanese political leaders to renew our insistence in this matter," Macron's office said.

The French stance comes after the expiry of a mid-September dateline set by Macron, who has set himself up as a broker for finding common ground among Lebanon's rival political factions.

Macron had announced in early September that Lebanese political leaders had promised him to form a government within two weeks.

The French leader is pushing for a revamped cabinet that will address urgently needed overhauls to get Lebanon's economy back on its feet, and address the deep public anger over the August 4 port blast that killed 191 people.

For many Lebanese, the disaster resulted from longstanding corruption and ineptitude among a political class that has failed to establish a functioning state or uphold the rule of law.

The French president has visited Beirut twice since the disaster to try to forge a working consensus for a reform-minded government, warning that he will block recovery funds from donors if no progress is made.

The people must march on Beirut, its parliament, Baabda and retake the ownership of their lives and fate.

Time to wield a very thick rod lest the child be spoiled. That’s the only thing our politicians and warlords understand, period.

The only thing that you have said on this site that is correct thus far.

The fault here is with France for setting an unrealistic goal for Lebanon. France expected a dictatorship to abdicate in less than a month, even though the dictator remained in control of the military. That was unrealistic and will never happen.

You should worry about your corrupt Netanyahu dictator

The last chance is here for every politician. Imagine when all your money in the bank is gone and owned by the Us