Geagea Says Foiling French Initiative would be a 'Crime' 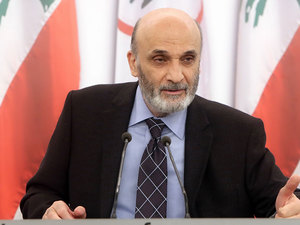 Lebanese Forces leader Samir Geagea on Wednesday decried that “what is happening in the issue of the formation of the government is a real farce,” as he said that thwarting the French initiative for Lebanon would be a “crime.”

“We are again hearing theories that had led to the country’s ruin in the first place,” Geagea tweeted.

Some are saying that “the parliamentary blocs will not grant their confidence to the government unless they are consulted over the names of its members and unless the portfolios are distributed to them,” Geagea said.

“This is what was happening over the past 15 years before we reached the current situation,” the LF leader added.

Noting that the French initiative is a “major and serious attempt to rescue Lebanon,” Geagea warned that “frustrating it and the attempt to end it in this manner is a crime.”

“Day after day, it becomes evident that no hope can be sought with the presence of this ruling group,” the LF leader added.

“The country can only be rescued through organizing early parliamentary polls quickly, in order to reach a new parliamentary majority and a new ruling group,” Geagea went on to say.

Wrong dr Geagea, it wouldn’t be a crime, it would be another crime on the long , never ending list.

And you are a part of 'this ruling group'.

We will never accept nor will Iran the Ministry of Finance to go to anyone but the shias.
Shia Shia Shia!!!

I dont think you understand what the dire circumstances will be if the French initiative will fail...look mate, one way or the other, your clan is going to break open if your eyes are not open to this just yet, so please do not support dragging lebanon down with that it.

Are we in iran... no so shut up and stop destroying Lebanon with Iranian trash :)

First class opportunist, like many others from his league ,in a sneaky way trying to find a way out.
is he a dr. ? in what? like the others in corruption for sure

Of course you do because you want to bankrupt the country, to apply Iranian hegemony and to provoke Israel. I was a sympathiser of the Shias long time ago as I thought you’re truly patriotic and modest people. Regretfully, you’ve shown throughout the years that you’re Iran tool to disrupt the region, you’re the founder of terrorism and pioneer of jihadism since the 80s and the more I read your comments the more I’m convinced That you’re nothing but fascist, hateful, intolerant and definitely unpatriotic. It is despicable.
Maronite, Maronite, Maronite to the core .....If that is how you want to play it.

everything he said is true however

Agreed!. Dr geagea is the only person speaking up against Hezbollah and the sulta so I give him my respect.

He is the only Political leader that has served jail time, yet he is the most genuine leader. Everything he says is very well considered and fits a purpose to serve Lebanon and only Lebanon.