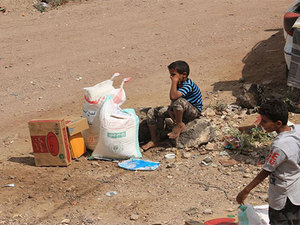 Kuwait announced Thursday it would donate $20 million towards humanitarian aid for war-ravaged Yemen, two days after UN officials called the country for not honoring its pledges, diplomats said.

The session -- organized by Germany, Kuwait, Sweden and Britain -- also included the four other permanent Security Council members (China, France, Russia and the United States) and the European Union.

Other countries announced aid pledges during the meeting, but details were not given, diplomats said.

On Tuesday, UN under-secretary-general for humanitarian affairs Mark Lowcock warned the Security Council that the "specter of famine has returned" in Yemen.

"Several donors -- including the Kingdom of Saudi Arabia, the United Arab Emirates and Kuwait, who have a particular responsibility, which they have discharged in recent years -- have so far given nothing" to this year's aid plan, he said, in a rare direct rebuke of member states.

"It is particularly reprehensible to promise money, which gives people hope that help may be on the way, and then to dash those hopes by simply failing to fulfill the promise."

The UN estimates that three-quarters of Yemen's population of 29 million depend on some form of aid for survival.

"Continuing to hold back money from the humanitarian response now will be a death sentence for many families," Lowcock warned.

The internationally recognized government in Yemen has been battling the Iran-allied Huthis since 2014, when the rebels seized much of the north including the capital Sanaa.

A Saudi-led military coalition intervened on the side of the government the following year.

Fighting in Yemen over the last six years has claimed tens of thousands of lives, mostly civilians, and sparked what the United Nations calls the world's worst humanitarian crisis.