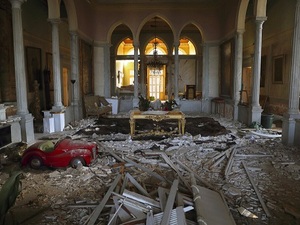 Lebanon on Sunday held a concert for the victims of last month's deadly Beirut blast in the grounds of a 19th-century palace wrecked by the massive explosion.

The August 4 blast at the capital's port killed more than 190 people, wounded thousands and destroyed or damaged buildings across swathes of the city.

"To be able to mourn, to take the time to really remember, it was important to have this moment of music," artistic director Jean-Louis Mainguy said.

The event was held in the gardens of the Sursock Palace, whose windows, red-tiled roof, ceilings and furniture were ravaged in the blast.

The concert, broadcast on television and streamed online in the late evening, kicked off with a rendition of "Li Beirut", an ode to the city by famed Lebanese singer Fairouz.

It was set to include virtual contributions from Lebanese artists, as well as the voices of some 250 choir singers from around the country.

Organizers asked Beirut residents to place a lit candle on their balconies and in their windows in commemoration.

The event was initially to be held at the port, but was moved after the air quality around the site was deemed too poor.

On Saturday night, Mika, a singer of Lebanese origin, headlined another concert streamed online to fundraise after the blast.