Partial Virus Lockdown in Madrid as U.S. Deaths near 200,000 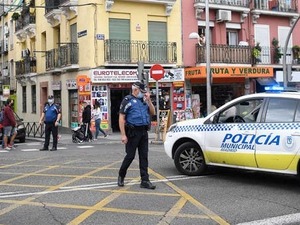 A million people in and around the Spanish capital on Monday were under new "stay-at-home" orders to contain another coronavirus surge, as the US death toll neared 200,000.

But unlike other nations that are tightening curbs to battle outbreaks, India pressed ahead with its measures to kickstart its battered economy, reopening the Taj Mahal and some schools on Monday -- despite having the second-highest caseload in the world.

The restrictions in Madrid will last for two weeks starting Monday, affecting people living mainly in densely populated, low-income neighbourhoods who will be allowed only to travel for essential reasons such as work, medical care or taking children to school.

On Sunday, people took to the streets in some of the affected districts in protest against the new measures.

They sported placards reading "No to a class-based lockdown" or "They're destroying our district and now they're locking us up".

"We think that they are laughing at us a little bit," said nurse Bethania Perez, as hundreds protested against the measure.

"We will still be able to go to work, and go into other areas that are not under lockdown, where we might be able to raise the infections and also still be vulnerable to infections in our own area."

Authorities in Spain -- among the worst-hit nations in the world -- have insisted the step is necessary because virus cases in those districts were much higher than the national average.

Prime Minister Jacinda Ardern moved most of New Zealand to its lowest virus alert setting on Monday, saying the country was edging towards eliminating Covid-19.

The Pacific nation has recorded just 25 deaths in a population of five million and has been widely praised for its virus response.

In India, however, infections are surging with tens of thousands of new infections being reported every day.

But with the economy reeling, the government has gradually eased what was once among the world's strictest lockdowns -- despite warnings from some experts about the virus spreading across the vast nation of 1.3 billion people.

"So many people lost their job during the lockdown. People have suffered a lot and it is time the country opens up fully," said bank official Ayub Sheikh, 35, who was visiting the Taj Mahal with his wife and baby daughter.

"We are not afraid of the virus. If it has to infect us, it will... I don't think it is going to go away soon. We have to get used to it now."

In poorer, crisis-hit parts of the world, the pandemic has piled on even more suffering.

In Iraq tens of thousands of Shiite Muslims participated in the annual mourning ceremonies of Ashura despite the government urging citizens to not attend large gatherings.

"Iraq has been through so much misery -- from war to torture to imprisonment to forced emigration and now the coronavirus pandemic," said Sheikh Hassan Dhakeri, a cleric in the shrine city of Karbala.

The United States remains the hardest-hit nation in the world, with more than 6.8 million cases and deaths approaching 200,000.

The pandemic has unleashed vast destruction on the world's biggest economy, with millions left jobless, and President Donald Trump facing intense criticism of his handling of the virus.

Trump has expressed confidence that a vaccine would be ready by October -- a claim contradicted by his administration's top health expert.

In the absence of a prophylactic, all public gatherings carry a serious transmission risk.

That worry impacted the biggest TV awards show in America on Sunday, as the Emmys ceremony was held in a mostly empty venue in Los Angeles -- with host Jimmy Kimmel dubbing them "the pand-Emmys".

The theatre was filled with cardboard cutouts of A-list celebrities, and around 130 nominees joined via video link. The awards were handed to the winners by presenters dressed in hazmat suits styled as tuxedos.

Kimmel signed off saying: "To all the winners tonight and all the nominees, I'll see you guys at the sad Zoom after-party."