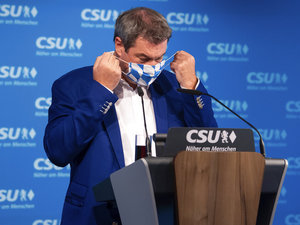 Bavarian state premier Markus Soeder said Monday he was getting a "stomach ache" over fears that this week's UEFA Super Cup final in Hungary could become the next coronavirus superspreader event.

But Germany has declared Budapest a risk-zone, after new infections there climbed above the threshold of 50 new cases per 100,000 people.

"We must be very, very careful that we don't risk a new form of football-Ischgl," said Soeder, referring to the Austrian ski resort where thousands of holidaymakers were infected with the virus at the beginning of the epidemic in Europe.

Around 20,000 spectators will be allowed to watch the match at the Puskas Arena, which usually has a capacity of 67,000.

Bayern fans are due to travel with some 3,000 tickets allocated to each of the competing clubs.

But Soeder warned that it would "not be sensible" to head to the Hungarian capital.

"I really get a stomach ache when it comes to the Super Cup," he said.

"We cannot risk having 2,000, 3,000 people, who are then possibly in each others' arms in celebrations, and then we will have an enormous infection wave," cautioned Soeder.

"It is something that one can't quite understand," he said about the unnecessary risks put on his team.

Hungary in September closed its borders to foreigners in a bid to limit the spread of Covid-19.

The only exceptions to the arrivals ban are players and spectators of international sporting and cultural events.

UEFA had said last Thursday they were in talks with Bayern over the final after Germany's travel warning to the Hungarian capital.