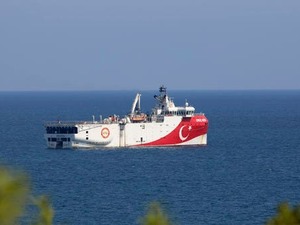 NATO said on Wednesday there had been "good progress" in military talks between Greece and Turkey aimed at avoiding clashes in the eastern Mediterranean, the scene of a dispute over energy resources.

Alliance chief Jens Stoltenberg said military officials from the two sides had held half a dozen meetings at NATO headquarters to try to agree a mechanism to prevent accidental air or sea clashes.

"These meetings are ongoing and good progress has been made," Stoltenberg said after talks in Brussels with the Spanish Prime Minister Pedro Sanchez.

"These are technical military talks. They complement the diplomatic efforts led by Germany to resolve the underlying dispute."

Over recent months a standoff over gas exploration in contested waters has led to a dramatic ramping-up of tensions, with the two NATO members staging rival war games, stoking fears that conflict could erupt, perhaps by accident.

But the tone has softened this week, with Athens and Ankara on Tuesday agreeing to begin exploratory talks to resolve the dispute.

Stoltenberg welcomed the move, while Sanchez described it as "a significant step in the good direction".