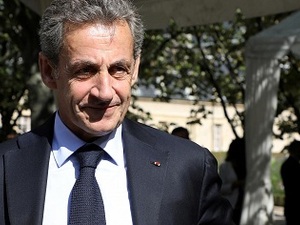 A Paris appeals court will rule Thursday on a legal challenge by ex-president Nicolas Sarkozy and former aides against an investigation into claims that Libyan money was used in his 2007 election campaign.

After several delays in the case, the latest due to France's coronavirus lockdown, judges examined the application behind closed doors in June.

At that hearing, prosecutors called for the appeal to be thrown out, according to sources with information on the case.

Sarkozy has been charged over accusations by former members of Moamer Kadhafi's regime that he accepted millions from the slain Libyan dictator, some of it delivered in cash-stuffed suitcases, for his first presidential campaign in 2007.

He was charged in 2018 with taking bribes, concealing the embezzlement of Libyan public funds and illegal campaign financing.

The probe was sparked by investigative website Mediapart publishing a document in 2012 allegedly signed by Libya's intelligence chief, which purported to show that Kadhafi agreed to give Sarkozy up to 50 million euros ($58 million at today's rates).

Sarkozy denies the charges. He maintains the document is a fake, but the courts have ruled it can be used as evidence.

Sarkozy and his former ministers Claude Gueant, Eric Woerth and Brice Hortefeux challenge the validity of the investigation on a number of procedural grounds.

All but Hortefeux are charged in the case.

The former president is also seeking to invoke head-of-state immunity on some of the counts against him.

The allegations that Sarkozy took money from Kadhafi -- whom he welcomed to Paris shortly after his election with much pomp but later helped topple -- are the most serious of several investigations that have dogged the ex-president since he left office.

The claims first emerged in 2011, as NATO-backed forces were preparing to intervene in support of rebels seeking to end Kadhafi's tyrannical 41-year rule.

The investigation is also looking into claims by Franco-Lebanese businessman Ziad Takieddine, who said he delivered suitcases stuffed with five million euros to Sarkozy and his then chief of staff Gueant in 2006 and 2007.

Sarkozy is also charged in two other cases, one relating to fake invoices devised to mask overspending on his failed 2012 re-election campaign, and another for alleged influence peddling.

He is set to go on trial in the second case on October 5, when he will become France's first ex-president in the dock for corruption.

Sarkozy has accused the French judiciary, with which he had a fraught relationship while in office, of hounding him.