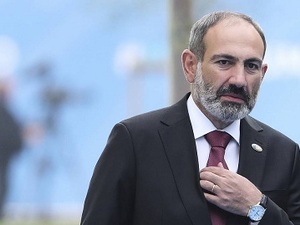 Armenia's leader claimed Friday to have evidence that Azerbaijani forces currently battling Yerevan's troops in the Nagorny Karabakh region are being militarily supported by Turkey.

At least 130 people have died over several days of fighting as the worst clashes since 2016 wrack the region, with France, the US, and Russia calling for an end to hostilities.

His country has previously accused Turkey of sending mercenaries to back its ally Azerbaijan, and on Monday the Britain-based Syrian Observatory for Human Rights said Ankara had dispatched at least 300 proxies from northern Syria.

Pachinyan's latest remarks were echoed by Emmanuel Macron, who said intelligence reports had also established that fighters drawn from "jihadist groups" had passed through Turkey en route for Azerbaijan.

The French president said that a "red line has been crossed, which is unacceptable" and demanded an explanation from Ankara.

Despite this, international powers continued to appeal for calm, even as the escalating violence threatened to suck regional powers Russia and Turkey into the conflict.

In a joint appeal on Thursday, Russian President Vladimir Putin, US President Donald Trump and Macron urged the two sides to return to negotiations aimed at resolving their longstanding territorial dispute.

Pashinyan and Azerbaijani leader Ilham Aliyev have both rejected the idea of holding talks, with the Armenian leader stating: "Nagorny Karabakh cannot disarm, because it would lead to genocide."

"The people who live there face an existential threat," he said.