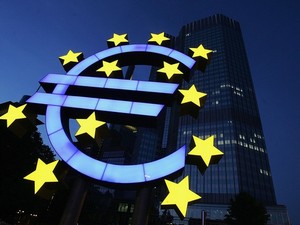 European finance ministers will try on Monday to give new momentum to talks on a Greek debt relief deal that is crucial to avoid a default, but a European diplomat warned that a final agreement may have to wait until a leaders' summit next week.

A deal would see Greece's private creditors — banks and other investment firms — swap their Greek bonds for ones with a 50 percent lower value, thereby cutting the country's debt pile by some €100 billion ($129 billion). The new bonds will also have much longer maturities, pushing repayments decades into the future, and a much lower interest rate then Greece would currently have to pay on the market.

However, even though the Greek government and representatives for the private creditors are moving closer to a final deal, issues remain — in particular over the interest rates on the new bonds.

If the interest rate is too high, a second, €130 billion bailout for Greece may not be enough to put the country back on its feet. Several eurozone states and the International Monetary Fund would have to provide more loans, but they are reluctant to do so.

The talks with the private creditors will likely drag on until a summit of European Union leaders next Monday "even if technically speaking a deal is at hand," a European diplomat said Monday.

"This has to be fixed at the highest level," said the diplomat, who was speaking on condition of anonymity because the negotiations are confidential.

The French and German finance ministers, Francois Baroin and Wolfgang Schaeuble, were holding talks in Paris before a meeting with their eurozone counterparts later in the day in Brussels.

Greek officials say negotiations on the private debt writedown are continuing over the phone, while no appointment has been set yet for new face-to-face talks this week.

Last week, officials from the Institute of International Finance, which represents the private creditors, held three days of intensive talks with Greek Prime Minister Lucas Papademos and Finance Minister Evangelos Venizelos on the bond swap, which is officially called-Private Sector Involvement, or PSI.

The negotiations had been due to resume Saturday, according to Greek officials. But IIF chief Charles Dallara left for a "long-standing engagement" in Paris on Saturday.

Dallara told The Associated Press over the weekend that he is "constantly talking by phone" with Greek officials and that the talks are "coming together."

The IIF's legal and financial advisers are still in Athens working on several "outstanding issues" with Greek officials and Dallara will return "as needed," a spokesman said.

Greek government spokesman Pantelis Kapsis said there was "absolutely no" question of the talks failing.

"Tonight's eurogroup meeting is important, and we hope significant steps will be taken there towards an agreement," he told state NET radio Monday.

On Sunday, Dallara was quoted by private Antenna TV as saying he had presented Athens with "the best possible" proposal on the debt writedown.

"I believe the elements now are in place for a historic voluntary PSI deal. It is a question now really of the broader reaction of the European official sector and of course the IMF to this proposal," he said.

Having the creditors accept the deal voluntarily would avoid the payout of insurance on the restructured bonds. The EU and IMF are trying hard to keep it a voluntary deal, but Dallara suggested their demands were pushing the limits of what the private creditors could consider voluntary.

"Our offer that was delivered to the Prime Minister is the maximum offer consistent with a voluntary PSI deal," he added. "We are in a crossroads. Either we choose a voluntary debt restructuring (or) the alternative is to choose the path of default."

Dallara said he was "quite hopeful" that common ground can be reached "in the very, very, very short term."

The writedown is a key part of Greece's second international bailout, agreed in October but not yet finalized. Since May 2010, the country has been surviving on a first €110 billion ($142 billion) batch of rescue loans agreed on condition of deep spending cuts and sweeping public sector reforms.

Debt inspectors from the EU, the European Central Bank and the IMF — collectively known as the troika — will be meeting government officials in Athens this week on the course of the austerity program. Without approval from the troika, Greece will be cut off from its rescue loan lifeline, which would force it into a messy default on its debts in late March and even possibly see it leave the euro.