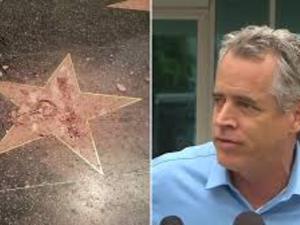 A man who took a sledgehammer several years ago to deface U.S. President Donald Trump's star on the Hollywood Walk of Fame has allegedly struck again.

James Otis was arrested on Monday for felony vandalism, accused of using a pick axe last week while dressed as the Incredible Hulk to destroy the star for a second time.

The 56-year-old activist, who had expressed his intention to damage the star on social media, turned himself in and was released Monday evening after posting bail, police said.

He was identified by officers as the culprit after police reviewed video footage of the incident that took place last Friday.

In 2016, Otis was arrested for the same charge and pleaded no contest after destroying the plaque with a sledgehammer and pick axe.

At the time, he expressed his open "disdain" of Trump and said he was not afraid of serving time in jail.

"I just sort of had enough with Mr Trump's aggressive language toward women and his behavior, his sexual violence with women and against women," he then told the Los Angeles Times, referring to accusations of sexual assault made against the president.

"I've had personally in my own family four people who have been assaulted or have had sexual violence happen to them. It all became very personal."

The star, awarded to the businessman in 2007 for his work on his reality television show "The Apprentice," has been defaced a number of times since Trump's election.

In 2016, a Los Angeles street artist built a tiny wall of wooden planks topped with barbed wire around it, in protest at Trump's campaign vow to build a wall on the Mexican border.

Several years ago, excrement was also left on the star and someone drew a large yellow X over it.

The star, located on Hollywood Boulevard, near the TCL Chinese Theatre, was covered by a white tent on Tuesday as crews worked to replace it.

The Hollywood Chamber of Commerce, which is responsible for replacing the star, has estimated the damage to the plaque at over $3,000.