Miqati’s Mission to Form Cabinet Made Difficult by Taxing Demands 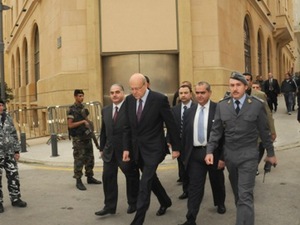 Prime Minister-designate Najib Miqati’s mission to form a new government is still ongoing 12 days after the start of the consultations, with informed sources telling the Syrian al-Watan newspaper that the Cabinet is most likely to be formed between February 16 and 18, at the latest.

The pan-Arab daily Asharq al-Awsat reported on Sunday that the efforts are likely to last a long time seeing as the sides that nominated Miqati have been raising the roof of their demands and conditions.

Meanwhile, sources from the PM-designate stressed that contacts are ongoing with the March 8 and 14 forces in order to reach an agreement over the formation of the Cabinet.

They said that there are several demands, especially by the March 8 camp, emphasizing however that the premier will form the government based on what he sees fit, while taking into consideration the central issues proposed by the two camps.

“A calm dialogue is being held with the March 14 forces away from the media spotlight despite the escalatory positions issued by some politicians from the camp,” they added.

“Miqati is optimistic with the course he is following and he is implementing his convictions,” they continued.

“He believes that difficulties in the formation of a government are normal. He has not set a deadline for its formation and he will keep it open-ended,” the sources stated.

An official in Miqati’s team who refused to be named told AFP that contacts are ongoing between all sides, “but nothing has been settled in the distribution of portfolios or naming of ministers.”

“The nature of the government will be determined with the March 14 camp’s final decision on whether it will take part in it or not,” he said.

“Should it decide to participate in it, then a 30-minister Cabinet is likely to be established. Should it refuse, then the government will include representatives of the new majority or technocrats,” he revealed.

"We are still stuck in this impasse as the crisis is deep, and there is no deep solution to this crisis," said Sahar Atrache, an analyst with the International Crisis Group think tank.

"Basically the talks on forming a government are just a way to buy time," Atrache told AFP.

"Contacts are ongoing with all parties but we are still at a preliminary stage where nothing specific has been agreed upon," said a source close to Miqati who requested anonymity.

"The government's shape will likely be determined by the final decision of (Hariri's) camp."

In an interview published Sunday, Miqati said he was determined to see all parties represented in his government, the form of which had become "clear" in his mind. He did not elaborate.

Former MP Ghattas Khoury, an adviser to Hariri, told AFP that the outgoing prime minister and his allies were waiting for Miqati to clearly respond to their demands before deciding whether to join his government.

"We are still waiting for answers to our questions, which must be stated in our meetings with prime minister Miqati ... before we make a decision on whether to participate," Khoury said.

"If what they want is to form a government, they now hold the majority and they can do that," he added, referring to the Hizbullah-led alliance. "But if they want our participation, we have set our conditions."

Another issue Miqati could face is the distribution of portfolios among Lebanon's many political parties, which have a history of haggling over who gets which ministries.

"When it gets down to the division of portfolios, the fight for shares in government will overshadow all other issues," Atrache said.

Lebanon's constitution does not set a deadline for a cabinet formation, and previous governments have sometimes taken months to see the light.

Miqati has said there was "no specific time limit for the birth of a government."

Leaders allied with Hizbullah have said Hariri's demands virtually guaranteed he and his allies would not be part of the next government, with Syrian-backed Christian MP Suleiman Franjieh calling the requests "impossible."(naharnet-AFP)