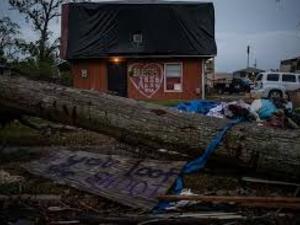 The U.S. national guard was mobilized and people on the Louisiana coast evacuated from their homes Friday as a strengthening hurricane bore down that officials say threatens a deadly storm surge and flash flooding.

Hurricane Delta earlier swept over the western Gulf of Mexico, where it ripped up trees and tore down power lines, and will slam into areas on the US seaboard badly battered by another massive storm just weeks ago.

"I don't even know if we'll have a house when we come back," said Kimberly Hester, who lives in Lake Charles, Louisiana -- right in the path of the storm.

"I just pray to God every night we can at least have a house to come home to".

It is now a Category 3 storm, which means "devastating damage" may occur, according to the NHC.

The Center warned that a "life-threatening storm surge" was expected along portions of the northern Gulf Coast, with a predicted swell of up to 11 feet (3 meters).

The hurricane earlier barreled into Mexico's Yucatan region, which escaped major destruction, with no reports of deaths.

Many along the Louisiana coastline have yet to recover from Hurricane Laura, which struck near the end of August as a strong Category 4 storm on the five-level Saffir-Simpson scale.

Louisiana Governor John Bel Edwards urged residents to be extremely careful with Delta, and announced that 2,400 National Guard personnel had been mobilized to aid locals.

Hurricane Delta would hit "in the area of our state that is least prepared to take it," Edwards said late Thursday.

"To the people of Southwest Louisiana, I know you are strong. I also know you are about to be tested again. Please finish making preparations now We will get through this."

In the city of Lake Charles, where torn planks of wood, uprooted trees and debris from Hurricane Laura still litter the streets, Shannon Fuselier drilled plywood over the windows of a friend's home as protection from flying debris.

Many neighborhood houses are covered with tarps from previous hurricane damage, and the home Fuselier was working on had already suffered roof damage from a fallen tree and smashed windows during Laura.

"The branches and leaves don't do that much damage," said Fuselier, 56. "It's pieces of metal, steel, frames of other peoples windows, signs from people's stores, nails."

Fuselier said that she was staying because she didn't think the storm was strong enough for her to flee.

Edwards has already warned that Delta could sweep up old debris and hurl it like missiles.

On Thursday there was a traffic jam in both directions on the highway out of Lake Charles as people left the city.

Terry Lebine had already evacuated to the town of Alexandria, some 100 miles (150 kilometers) to the north, during the previous hurricane, and was ready to head out again.

"It's exhausting," she told AFP. "...I've got my mother, she's 81 years old and not in the best of health. Right after we went back home after Laura, we have to leave again for Delta. We were home a good two to three weeks."

As the ocean surface warms due to climate change hurricanes become more powerful -- and scientists say there will likely be an increase in powerful Category 4 and 5 storms.