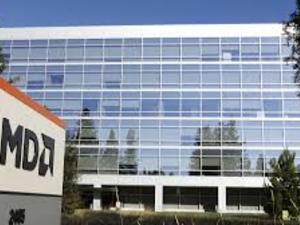 Advanced Micro Devices is reported to be in talks to buy chip-making rival Xilinx in a deal valued at more than $30 billion, further consolidating the industry.

A merger of the two Silicon Valley companies could be announced as soon as next week, or acquisition talks could stall as they have in the past, according to a Wall Street Journal report late Thursday that cited unnamed people familiar with the matter.

The companies did not immediately respond to a request for comment.

AMD is one of the largest semiconductor firms, specializing in processors for personal computers, servers, and gaming.

AMD revenue has climbed this year, with the pandemic fueling demand for computers and video game consoles as people rely on the internet to work, learn, and play more at home.

Xilinx, founded in 1984, is known for adaptive chip processing systems used in an array of industries including telecommunication, automotive, and defense.

Xilinx shares were up more than 12 percent on the NASDAQ index in mid-day trading on Friday, while the price of AMD shares was down more than four percent.

U.S. graphics chip maker NVIDIA in September announced the big-ticket buy of Britain-based Arm, whose microprocessors are in many smartphones.

Japan's SoftBank Group said it is selling Arm to NVIDIA for up to $40 billion, potentially creating a new giant in the industry but sparking an investigation by UK regulators and fears about the impact on jobs.

If approved, the deal will be one of the largest acquisitions anywhere in the world this year and propel NVIDIA to the forefront of the semiconductor sector.