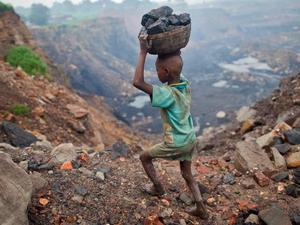 His hands caked with paint and dust, Aakash looks right at home working at an auto repair shop -- except that he is a minor, one of millions forced into the Indian labor market.

More than 10 million Indian children between five and 14 toil in farms and factories, or clean restaurant tables and shine shoes, a situation exacerbated by the coronavirus pandemic.

AFP this week accompanied Bachpan Bachao Andolan (BBA), a children's rights group whose founder won the Nobel Peace Prize, as it conducted raids together with police in New Delhi.

Early Tuesday, Syed Arshad Mehdi, a 20-year BBA veteran, walked into the auto shop and gently led Aakash (not his real name) out into the morning light.

Aakash at first denied he worked at the garage, but Mehdi turned the teenager's hands around in his own, saying softly: "Look at your hands, they are full of paint and dust."

He and 11 other boys, all believed to be aged below 18 and made to work 16-hour days for a pittance, were picked up in restaurants and a garage that night.

They were taken to the district magistrate's office, where handwritten pieces of paper numbering from one to 12 were stapled on their T-shirts as face masks hid their expressions.

Each boy was called up to a desk, where they were asked their name, age, the village and state where they had come from, how many hours they worked and what they were paid.

After health checks, a coronavirus test and help to reclaim their full wages, they will be sent back to their family homes -- often poor villages and towns across northern India.

Employers can be charged with child labor, bonded labor and trafficking, but successful prosecutions are rare.

Under the law, children under 14 are prohibited from working in most situations, while those between 14 and 18 are barred from being employed in hazardous occupations -- which includes some restaurant work.

BBA has rescued 1,200 children since April, but more and more are being sent to work because of the epidemic, the organization's Dhananjay Tingal told AFP.

The months-long coronavirus lockdown has devastated Asia's third-largest economy and millions of Indians have lost their livelihoods.

As a result, more poor children were being pushed to take up jobs to help support their families.

Children were also seen by employers as willing to work extremely long hours for even lower pay than adults, making them open to exploitation and abuse, Tingal said.

"The conditions in the villages... are very bad," Tingal said.

"Families now need maximum hands at work to earn money. If we don't take corrective action right now, this will only worsen."